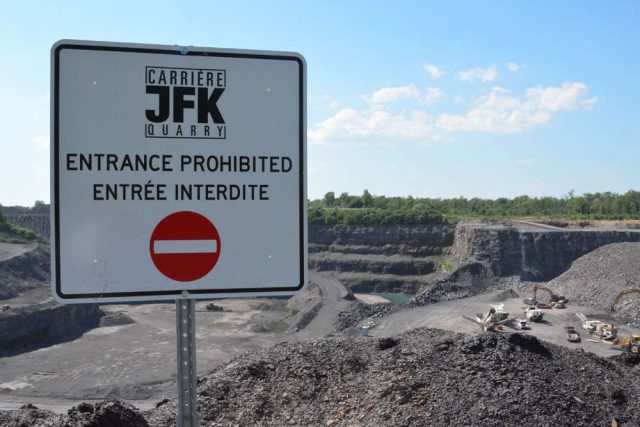 The JFK Quarry has been a staple of Kahnawake’s business communities since the hole started to be dug in the 70s. Access to the site remains contentious as there getting to the pit means taking one road: Route 207. (Daniel J. Rowe, The Eastern Door)

One can rarely talk about the business that started digging in the 70s without talking about the road trucks use to deliver stone.

Trucks deliver to work sites in Kahnawake and beyond the territory and there is only one road they can take, the 207. If a truck turns left leaving the business, it’s around two kilometres to Highway 30. If it turns right, it’s around six kilometres and passes a number of residents, golf courses and businesses along the road.
Quarry owner Frank McComber was sent a letter form the Mohawk Council of Kahnawake June 30 saying that truck traffic must only use the road to access Highway 30, and cannot use Route 207 to Highway 138.

“Chief and council unanimously passed and MCED (Mohawk Council executive decision) restricting truck traffic on the 207 and OCR in the best interest of the health and safety of community members,” said council chief Carl Horn. “This is nothing new. In 2007, MTQ (Ministry of Transport Quebec) and MCK agreed that trucks were banned, but it was never officially passed through an MCED. Now it’s official. No trucks on those roads except local deliveries.”

JFK responded with a news release this week saying that the policy will “put JFK out of business.”

The reason is a question of time and bidding power.

JFK’s biggest competitor is Sintra Inc. located in St. Isidore just south of Highway 30. McComber is concerned that the travel restrictions will create a major competitive disadvantage in future negotiations for contracts.

“Say we’re bidding, and our company and Sintra are after the same bid,” McComber told The Eastern Door. “The company’s going to say if I turn right from the 30 to the 207, I get stopped by a cop, and if I turn left, the cop’s letting me go because all the traffic’s stopped, so Sintra will get the job because we lose an hour of waiting time. Our location is going to be a big problem for us.”

Horn said council receives complaints about truck traffic on a regular basis from residents in the area.

Horn said there are letters of complaints, but that council is bound by confidentiality agreements and cannot release the letters.

Quarry management wants to see the complaints, so they can address them properly without it adversely affecting the business.

“They always said there were complaints, but where are they,” said McComber. “We have never, ever seen a complaint about the quarry or the 207. The only complaint we’ve ever had was a month and a half ago.”

McComber explained that he received a complaint from a local resident via email, met with the person, and dealt with the complaint Monday morning.

As written in JFK’s news release, the business conducted a community consultation in the summer of 2015 with residents living along Route 207 and those living on the JFK Quarry road. According to the release, the MCK refused to participate in the consultation, and Peacekeepers said there were no complaints to date.

Horn, who lives on the 207, says he was not consulted last summer as a chief or a resident as part of the project.

McComber added that the quarry implemented a policy, so trucks do not travel north on the 207 from 6 to 9 a.m.

“We basically did that because of the buses in the morning,” said McComber. “We did that out of respect.”

The hope for the future is that an access point can be found for trucks to go directly onto the Highway 30 from the quarry using a southeast access point.

The MCK and quarry recently signed an agreement that quarry management thought would allow for the business to continue using Route 207.

The quarry has shipped over a half-million tons of rock in the past eight years, and, as stated in the news release, provides millions of dollars in royalties to the MCK coffers.

Royalties rose from 50 to 56 cents per metric ton of rock shipped out based on the new agreement.

Horn said the restriction of truck traffic is for one reason.

“I want to make it clear, the community’s health and safety is the table’s number on priority,” he said. “The truck traffic has been an ongoing issue for years and we feel we did what’s best for the collective.”

The quarry is ISO (International Organization for Standardization) certified business with contracts in the Turcot Yards ongoing construction projects. In addition, it provides concrete for the Kateri Memorial Hospital Centre’s expansion project.

“Our products, our concrete and our stone, meet and exceed the standards outside,” said quarry director of operations Mike Arigriou. “We’re always striving to be better. We bring a lot of good things – not only in the community with money and services and better prices for them – but we can also compete with the very best outside the community.”

The quarry is currently looking at restoration projects that would eventually fill the quarry using landfill.

“What we want to do is present those options, but present them to people who understand the content of it,” said Arigriou. “In the next couple months, we want to make a presentation with these options.”

More immediately, quarry management is concerned that limited access to the 207 will negatively affect contracts based on 10-year agreements with the MCK.

“We don’t know what’s going to happen,” said McComber. “We’re worried about that.”