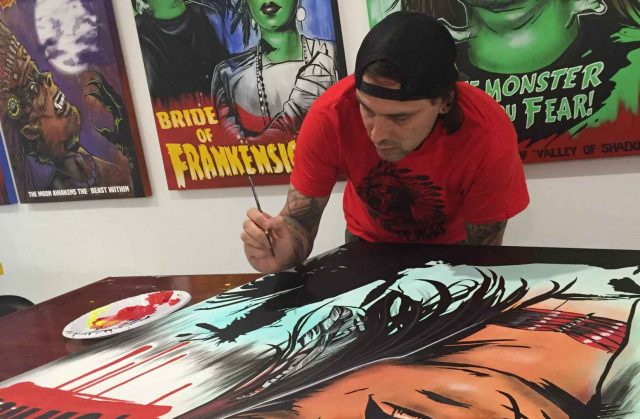 Soule, who is from the Chippewas of the Thames First Nation, debuted Indigenous Movie Monsters last night at the Ashukan Cultural Space in the heart of Old Montreal.

The series features eight large-scale acrylic paintings on wood that are inspired by the retro movie poster art from the 40s and 50s.

“I’m a huge horror movie fan,” said Soule, who creates art under the name Chippewar. “The idea is that I’m recreating the 40s and 50s classic horror movie posters but making the lead characters Indigenous. I always look for ways to try to infuse both cultures of (being) Indigenous with contemporary art.”

The style caught the eye of founder and executive director Nadine St-Louis last year at the Pan Am games in Toronto.

“I was the MC at the Aboriginal pavilion, so I was walking around looking at the vendors – you had the dream catchers, the wolf t-shirts, the frybread trucks, and then you had Jay Soule,” said St-Louis. “When I saw his work, I thought it was out of the box. His work is very urban, it’s very now and he’s tapping into that emerging audience of young people. It’s just so new, refreshing to see Indigenous works that are not based on stereotypes.”

Soule told The Eastern Door that he tries to stay away from what many other Indigenous artists are doing.

“I made a conscious effort to look at what was being done, and I didn’t want to be the stereotypical First Nations painter – I didn’t want to be a woodlands painter. My idea right from the being was completely set myself apart from all of those,” said Soule.

The effort is demonstrated by much of his work, which draws inspiration from his previous careers in design, tattooing, and street art.

Between 25 to 30 hours were spent on creating each piece over the last five months.

“I always paint on wood. I just really love the texture of it and oftentimes, I leave wood grains showing and in the movie poster ones, I sand little bits to bring the wood grain back out,” he said.

Indigenous Movie Monsters will run until August 18 at Ashukan.

In addition to helping break stereotypes, Soule said the series will also help start a dialogue between different cultures.

St-Louis expressed similar sentiments when discussing the importance of Ashukan hosting contemporary artists at their space.

“It’s a very accessible gateway to tap into a multitude of demographics, whether it’s tourists or the nightlife people that walk by – having coverage is essential to bring awareness,” said St-Louis. “Bringing modern artists is really necessary to break the stereotypes, to bring dialogue between nations and also to bring awareness that Aboriginal artists are young, urban, educated, and they’re more than the last of a dying race that Hollywood has been trying to promote to us.”