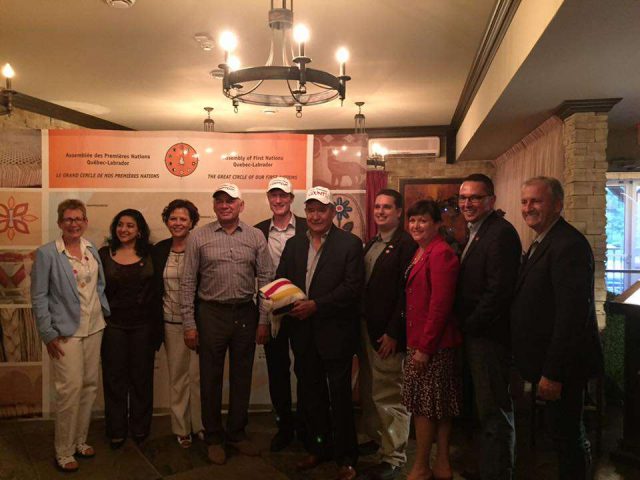 Member of Parliament Marc Miller (Ville-Marie—Sud-Ouest) poses for a photo after an informal meet-and-greet with MCK and AFNQL leaders. The MP was one of several who attended the session last week. (Courtesy Marc Miller)

A Kahnawake eatery was host to a multi-governmental meeting spanning three political organizations.

Several members of the Canadian Parliament met with MCK chiefs and leaders from the Assembly of First Nations of Quebec and Labrador (AFNQL) at Xavier’s restaurant in Kahnawake on Tuesday.

The purpose of the meeting was a meet-and-greet, said MP Marc Miller, chair of the Quebec caucus who represents the Ville-Marie—Sud-Ouest federal riding in Montreal. No specific issues were discussed in a group.

“That’s for a later date, if there is that opportunity,” Miller said.

Many of those ridings cover Kanien’kehá:ka traditional territory, Miller noted.

“Hats off to the AFNQL for doing this,” said Joe Delaronde, political press attaché for the MCK. “For us, we’ve seen—in Kahnawake—that the (political) winds have changed. That’s for sure. Are we getting excited about it? I think we’re very pragmatic.”

AFNQL chief Ghislain Picard invited the Liberal Caucus to the AFNQL’s offices in Kahnawake after meeting with the caucus in Ottawa.

“We gladly accepted, obviously,” Miller said. “It’s a big mission of this government on a number of levels to renew our ties to First Nations.”

The meeting was a first step towards a better relationship, Miller noted, and could be the foundation for a more personal dialogue in the future. Miller has encouraged members of his caucus to attend Kahnawake’s Echoes of a Proud Nation Pow Wow on July 9 and 10, though he noted will be travelling and unable to attend himself.

“Unfortunately, the level of knowledge of our First Nations is very limited. It’s limited to what we are taught in school, and that needs to be deepened in order to have any meaningful progress on the projects we’ve undertaken,” Miller noted. “The commitment in the budget is clear and unequivocal.”

The government allocated $634 million over five years for projects to improve Indigenous child welfare and $2 billion for First Nations education in the budget tabled in March. (However, $1 billion of the education funding will not be available until after the next election; several Indigenous leaders decried the funding as inadequate.)

Fiscal items are less important to Kahnawake than to other communities, Delaronde noted, but the relationship is crucial nonetheless.

“When you’ve shaken hands and you’ve looked them in the eye,” Delaronde said, “it makes a big difference.”

“(Issues) need to be put onto the table in a very frank and open discussion. If you don’t have that bond, I think there is automatically suspicion,” Miller said. “It’s going to take time. Every First Nations has its own particular and clearing out a lot of the ignorance on our side is extremely important.”