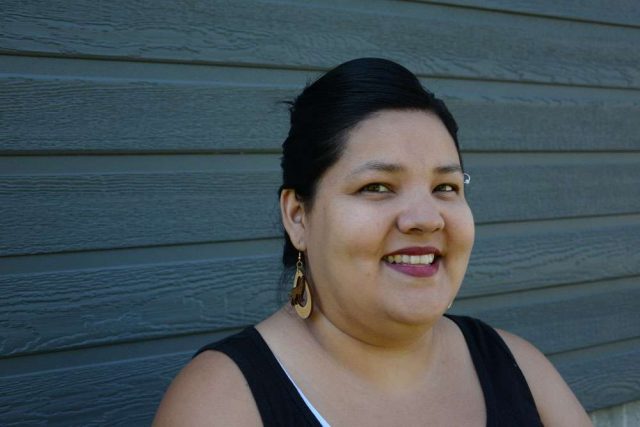 Kahontiiosta McComber her boyfriend, son and mother all can communicate in Kanien’kéha. The task now is to ensure it becomes a constant part of their lives within the home and in everyday activities. (Daniel J. Rowe, The Eastern Door)

To achieve excellence, sacrifice is required.

Teacher Kahontiiosta McComber made a decision at 34 to develop her teaching skills in a dramatic way.
The single mother was teaching at Kateri School, and, at risk to herself financially and professionally, she signed up the Kanien’kéha Ratiwennahní:rats Adult Immersion program.

Kahontiiosta had taught at Kateri since 2001, and replaced a Kanien’kéha teacher on maternity leave for the majority of a year.

Though she enjoyed teaching the language and was capable of instructing the students, she wanted to go further to develop her language ability.

“In my teaching I was limited to what we’re teaching them because it’s second language, one word, which I was very capable and confident in because it’s just a list of vocabulary words that we were teaching,” she said. “I just wanted to upgrade myself because when you’re teaching it’s a lot of commands because you’re always telling the kids to do this and that.”

She wanted to go from command to communication in the language.

Her son, Tehothahatenion Phillips, is nine and going into grade three at Karonhianónhnha School giving her the perfect opportunity to speak in the home.

“With my son in immersion, I wanted to be able to speak to him more,” she said.

In addition, Kahontiiosta’s mother, Winnifred McComber, is a fluent speaker, and having a conversation that bridged three generations was greatly appealing. Her father is Stephen McComber.

She signed up, and her eyes were opened immediately to the joys and complexity of the language.

“I could say quite a bit, and could tell you things, but I didn’t know a lot of verbs,” said Kahontiiosta. “Being in there just blew my mind. I had a headache for the first six months of all this info and learning.”

The headaches, it seems, were not a negative thing for the teacher become student, as a big smile explodes across Kahoniiosta’s face when speaking about engaging with the language.

“It was really a great experience because I got to see how things were done,” she said. “When my mom speaks, she just tells you, ‘that’s the way it is,’ but to actually know why it changes, and all these suffixes and pronouns it was really… Wow.”

Language paired with love for Kahontiiosta, as during the program as she met her current boyfriend Shakonwaré:tsi Silversmith, who took an immersion course in Six Nations where his family is from.

The couple sent messages back and forth on Facebook, and soon found various connections beyond language skills.

The rest is a classic romance story.

“That’s how we met,” said Kahontiiosta. “Just through talking, and then we hit it off, and he came down here and lives here now, and all three of us can talk in the home.”

Kahontiiosta can now do what many students profiled in The Eastern Door say they want to do: build the language at home.

“I’m very proud that we can do that and that we’re including my mom as well,” she said. “Three generations there of speaking.”

Though the family’s language ability is strong, work still needs to be done in the home.
“It’s difficult at times because we’re so used to English,” said Kahontiiosta. “You’ve got to start somewhere.”

For example, she needs to remind her son to say ‘ohnekános’ instead of ‘water.’

“You have to change those words that we know,” she said.

Her son, at times, combines English and Kanien’kéha within sentences, which, though cute, is something his mother is trying to help him correct.

With joy, however, came sacrifice.

“It was definitely worth it,” said Kahontiiosta. “Was it hard and a struggle? Yes.”

For a high school graduate living at home, the sacrifice of two years is much different than the one for a mother forced to leave her job.

She relied on unemployment insurance for 29 weeks after Kateri School laid her off, then social assistance and funding from Tewatohnhi’saktha.

Her parents and boyfriend helped as well, which she is eternally grateful for.

“I don’t know how people on their own with a child can do it,” said Kahontiiosta.

The sacrifice was worth it, as Kahontiiosta gained language and love, and said she was hired to teach grade two at Karonhianónhnha.

“I got to learn, and the experience is amazing,” she said. “The experiences I had. I wouldn’t have met my boyfriend if I didn’t take the course.”

She would like to see more support for students taking the course, so future learners are not as stressed financially as she was.

“The town talks about how important our language is, and it is important, it’s very important, that’s who we are, but yet there’s no money there to help people to do it,” she said.