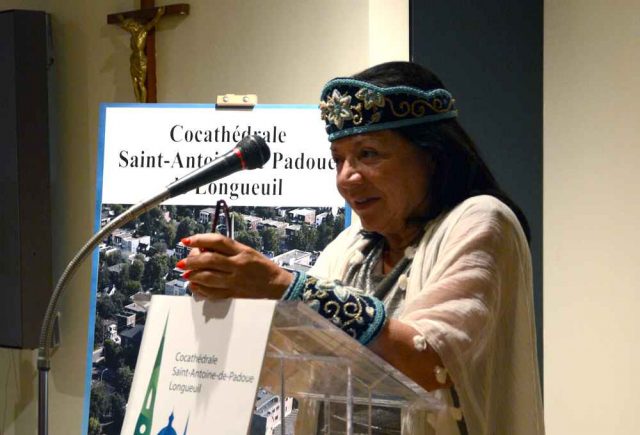 MCK chief Christine Zachary-Deom was one of many who spoke at the opening of the Co-cathedral St. Antoine de Padoue in Longueuil Wednesday night, and embraced the collaboration between the municipality and Kahnawake. (Daniel J. Rowe, The Eastern Door)

Entering the impressive Co-cathedral of St. Antoine de Padoue in Longueuil’s historic village area, visitors, pilgrims, and fans of history are encouraged to continue to front of the church, take the stairs and head down to the church’s newly renovated museum that opened Wednesday.

The first display case visitors see upon entering the space houses artifacts not from French Catholics or their descendants, but rather the first people of the region that included the Kanienkehá:ka.

Mohawk Council of Kahnawake chief Christine Zachary-Deom was on hand Wednesday to applaud the work of creating a museum that recalls the historic relationship between the two communities.

Zachary-Deom got a laugh from the crowd when she congratulated the Longueuil church “with a little bit of jealousy.”

“We are in the throws of attempting for the third time to establish a museum,” she said. “We have one of the best histories in Canada, and you’re allied to that history. You’re a survivor of that history. You are in a relationship with the first people of this land.”

The museum team began construction of the space in January located in the basement of the Co-cathedral, which was inaugurated in 1887.

“It’s like a story of the first occupants – the Mohawks – here in the first part of the museum, and the story of the three churches in the parish,” said coordinator Michel Couturier. “It’s a brand new kind of museum and we appreciate the collaboration from the Mohawk community because we have some objects from the Mohawks and we can show them here.”

The display includes a rattle, woven basket, wampum belt, pipe and broken shards from a pot.

Tourism staff and cathedral personnel expect tourism to pick up throughout the summer, and are hoping interest spreads to the other five spots on the South Shore tourism circuit.

In addition to the Co-cathedral and Kahnawake’s Catholic Church, the Marie Rose Centre in Longueuil, Ste. Famille Church in Boucherville and the Sanctuary St. Marguerite d’Youville in Verennes make up the St. Lawrence Shrine Circuit that launched in May.

“It’s good news for us, and the Mohawks also,” said Couturier. “We have collaborated with for example Kimberly Cross from the community and other people just to have common interest for developing a new circuit for Kahnawake, Longueuil, Boucherville and Verennes.”

Individuals can tour all five spots in about eight hours.

Working collaboratively will help all communities grow their tourism industries respectively including Kahnawake.

“It’s really a big step in our relationship with the different religious circuits,” said Kimberly Cross of the Kahnawake Welcome Center. “It will really open up to many other networks that we are able to work with like tour companies and different religious groups that are wanting to come here.”

Cross-Zacharie added that the relationship between the two communities has been great, and that it is a positive thing to show the connection between two communities that in the past may have had differences.
“With the opening of this museum, it touches a little bit on Indigenous culture and the link between Longueuil and our culture,” she said. “Showing the link there, we can connect it to our hometown Kahnawake, and it shows the importance of having a relationship with everybody here.”

Kahnawake’s tourism staff continues to work towards a space much like the one in Longueuil.

“I’m hoping they can help us work on our museum, and we’ll all collaborate together,” said Cross-Zacharie.