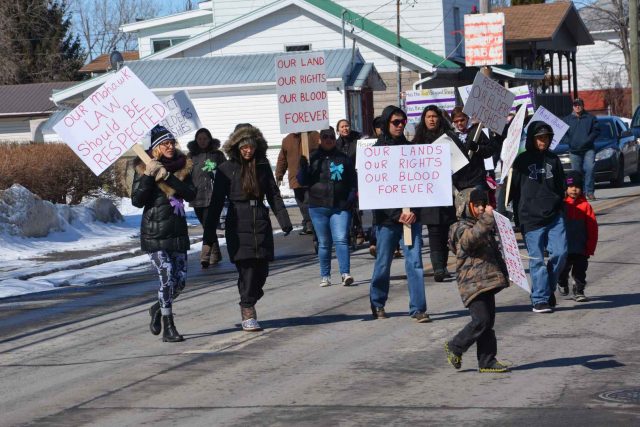 A grassroots group who demanded that non-Natives living in Kahnawake leave the territory organized a number of marches and rallies throughout the spring of 2015. (Daniel J. Rowe, The Eastern Door)

Non-Natives allegedly residing in the community were served with another round of eviction letters this week.

The Mohawk Council of Kahnawake issued the letters of “violation of Mohawk Law – non-entitlement to reside in the Mohawk territory of Kahnawake” by bailiff to 20 people who are presumed to be living in the community.

“If you’re not a member, you’re not an approved Kahnawake resident and if you have no lineage, you’re not entitled to live here,” said membership portfolio chief Kahsennenhawe Sky-Deer. “We’re trying to peacefully remind people that this is the law and we hope that people respect it.”

Since 1981, council has had in place a moratorium on “mixed marriages.”

In ’84, it became law resulting in any community member who thereafter married or lived in common law with a non-Native losing their membership.

“This all stems from our reaction to the Indian Act and the inequality of our Native women had to leave the community, so the community sent a directive in ’81 that from now on anybody who marries out leaves the community,” said Sky-Deer. “It’s always been directed by the community of how this law proceeds, even right now through our Community Decision-Making Process (CDMP).”

The letters, signed by MCK grand chief Joe Norton, ask the recipients to “respect the laws of the community and the will of the people” by vacating the territory or to otherwise provide proof of residency outside of Kahnawake.

“Please be aware that you are to relocate outside of the Mohawk territory within 10 days of receipt of the letter,” it reads.

“Membership is still on the front burner. I constantly get emails, I get calls, so there is reporting that is going on. We’re hoping people take it seriously. Our whole approach is to mitigate the grassroots group starting back up and protesting in front of peoples homes which is very uncomfortable,” she said. “We’re always trying to say that people need to be patient and to not take matters into their own hands. Council is trying to do our due diligence because it is our responsibility to uphold the law.”

Jeremiah Johnson was a part of the grassroots group that protested in front of ‘mixed couples’ homes last year.

“I could understand how council wants to keep things quiet, especially in light of the lawsuit – we don’t want to look like the community is a bunch of vigilantes roaming the streets to oust people,” he told THE EASTERN DOOR.

Johnson was also one of the community members that lodged a complaint to council about possible non-Natives living in town.

“It’s important that all community members take initiative when they see a problem or somebody on the reserve when they shouldn’t be here – to make note of it and definitely report that person,” said Johnson.

Overall, he said he’s happy with the MCK’s recent actions.

“I’m happy that they’re continuing to be proactive on the issue and showing that it hasn’t fallen by the wayside. People are still upset about it – it hasn’t gone away. People have gotten a little quieter with marches and protests, but the issue has not been dropped by the community,” said Johnson.

In 2010, Kahnawake made headlines across the country when council issued a number of eviction letters by bailiff to non-Natives, and subsequently released a number of similar open letters to the community.

According to Sky-Deer, around 40 non-Natives have since left the community as a result of council’s pressure tactics.

In February, eviction notices were also sent to four non-Native individuals who were living in town.

“Three out of four left,” said Sky-Deer. “We’re waiting for some kind of proof – a lease, a bill in their name – something current that we can say ‘okay, understood and if anybody ever tried to complain in the future they’ll already know that we verified and did our due diligence.’”