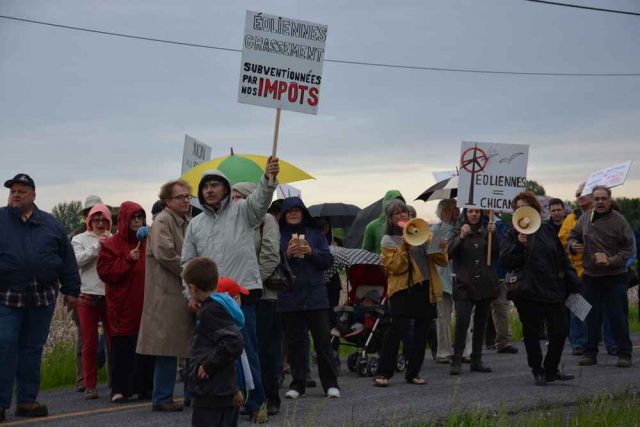 Kahnawake Sustainable Energy’s plans for a wind farm in St. Cyprien-de-Napierville are one step closer to going from plan to project.

The wind farm would put eight new turbines on farmland in the territory, which mostly produces corn and soy, according to the CPTAQ decision.

KSE first began the project in 2010 as part of a Hydro Quebec call for tenders for Aboriginal wind farm operators and signed a 20-year contract to provide electricity to Hydro-Quebec in 2011. The project went through a BAPE public inquiry process in 2015.
The project is expected to cost $58 million.

The CPTAQ decision is subject to several conditions. For example, KSE must relocate arable topsoil during construction and preserve it for redevelopment after the construction is complete. An agronomist, a scientist who studies the technology of producing and using plants, must also file a report each March during construction and for five years after it is completed about the state of the work and the impact of the farm on the local agricultural environment.

KSE must provide a security deposit of $48,000 and bring on an agronomist within six months and construction must begin in the next two years for the CPTAQ decision to take effect. If KSE fails to meet these deadlines, the CPTAQ’s determination is nullified, the decision stated.

The timeline is standard and reasonable, Jacobs said.

Farmers and some citizens in the region had objected to the project because they felt as though their opinions were not being considered, especially regarding the potential impact on agrotourism.

“The Commission’s track record has been to rubber stamp industrial-type wind projects on agricultural lands,” she said. “It makes one wonder exactly what its role is when it comes to ‘protecting’ farm land.’

“We do not understand why these arguments were not taken more seriously,” Woods said.

“The St. Cyprien project might seem like a drop in the bucket, but if this policy of approving industrial-type projects on farm land continues unchecked the small percentage of arable land left in Quebec will steadily diminish.

“We wonder why the government could not, by creating a new decree, be more flexible and allow KSE to move their project to an area where it would not impact agricultural land,” she added.

The CPTAQ stated that it believes “the project will not generate significant negative impacts on the potential and possibilities of use for agricultural parcels referred because of low permanent areas that will actually withdrawn from agricultural production.”

“We’re an agricultural people ourselves, and we have almost nothing left, you know?” Jacobs said, who added the existing roads made the location ideal—for the wind resources and for a minimal agricultural impact.

“All of the roads were almost exactly configured for a wind project to go there,” she said.

According to the decision, the wind turbines will be around 99 metres tall and built on a circular concrete base that will extend 20 centimetres above the ground. Each turbine will require about 1 hectare of land during the assembly and construction phase, but only .004 hectares after construction is over. The remainder would be returned to agricultural land, leaving a total of 5,000 square metres that will be unable to be cultivated during the wind farm’s operation.

KSE also received authorization to use about 11 hectares of land for other purposes during the construction and operational phases, including land for an access road, electric lines, and a soil deposit site.

Finding a place for the wind farm “was difficult,” the CPTAQ noted, “because of regulatory and technical constraints.”

Wind farms must be two kilometres from an urban area’s border and 750 metres away from any dwelling. These facilities may also not be within 300 metres of a road or 3 metres of a lot line.

Woods also noted that Hydro Quebec currently exports a substantial amount of electricity. According to Hydro Quebec’s website, the utility netted $1.645 billion from electricity exported outside of Quebec in 2015 and the province boasted the second-highest wind power capacity in Canada in 2015—3,262 MW—behind only Ontario.

The next, and possibly final, step for the project will be to secure an approval from the Quebec Council of Ministers. Jacobs noted that there is no defined timeline for the council’s approval.