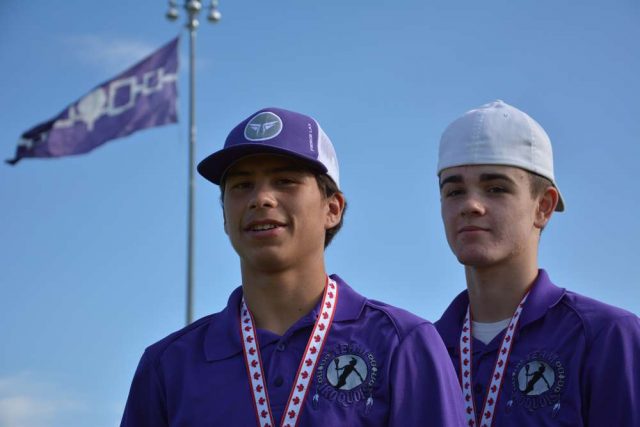 Cam Horn and Troy Lauder have played together for Team Iroquois, Billings, Sweetlax, and the Kahnawake Mohawks. The two, however, will not be able to bring their unique chemistry to the U19 Iroquois Nationals team next month in Coquitlam. (Daniel J. Rowe, The Eastern Door)

The Iroquois Nationals roster for the Under-19 team  was released this week two weeks ahead of the FIL U19 Men’s Lacrosse Championship that begins in Coquitlam, BC July 7.

“It feels good to be selected to the team,” said McComber, who plays at Salisbury Academy along with Lauder on the school’s varsity team. “It is going to be weird not having Troy there like I usually do.”

Kirby is recovering from surgery on his heel in February that caused him to miss the year at the University of Albany, and could have played, but was not 100 percent.

Lauder thought his spot was assured, but was informed that he would only be chosen as an alternate.

“I first got told that I was on the team, and then got called the day after saying, ‘we’re sorry. It came down to two spots with you and another kid, and we have to let you go,’” said Lauder.

Lauder wanted to be part of the team, but didn’t appreciate being strung along through tryouts thinking he would make the team.

“I feel that I’m better than most of the kids that would be fighting for the midfield spot,” said Lauder, who asked if the coaches would give him a fair shot to earn his spot on the final roster.

“It wasn’t anything that was politically driven that the article shined a light on,” said Jemison, after the original print story was published. “It just came down to a numbers thing, and it came down to a talent thing. The coaching staff made a decision on a player that they felt was going to best suit what they were looking for. It was a difficult thing. It wasn’t something that we were anticipating. It was more of a surprise than anything and it was unfortunate.”

There are three spots on the team for those without Haudenosaunee passports, and Lauder found himself in a competition for the spot with Horn. Cherokee goalie Brody Bartell and Squamish midfielder Sekawnee Baker also made the trip to Coquitlam to vie for a spot on the final roster.

Jemison said the choice between the two players was difficult, but that the Nationals must follow rules in regards to players the team selects with or without passports.

“It’s a difficult thing,” he said. “The onus is on the players to come forward when those types of situations arise, and that was something that we weren’t anticipating. It was a really frustrating thing.”

The Confederacy requires a clan based on matrilineal lineage in order to be issued a passport. This reality requires managers of the Nationals’ teams to make tough decisions about who gets a roster spot if they do not possess a passport.

“All of our communities have issues with this, and it’s something that’s going to continue to be an issue,” said Jemison. “Quite frankly, I hate being in the position, and the Iroquois Nationals don’t want to be in the position of excluding people because of family lineages and things like that. That’s not what we’re about.”

The rules are set by the Federation of International Lacrosse, and require passports for players who are on national sides.

Canadian, American and all other players are required to have passports.

“We have to adhere to those things just like any other country would as well,” said Jemison. “These are protection things that are put in there, so that other countries that are developing are not going to load up on a bunch of North American players.”

Horn is also bitter/sweet about making the squad knowing what he and his lifelong friend could do together on the field.

“(I’m) pretty excited to be a part of the team, but pretty let down about Troy not making it because of the chemistry we have in the outdoor game,” he said.

Jemison said he wished the situation could have been different for Lauder, who, he feels, is a quality player with a bright future.

“I feel for the kid,” said Jemison. “I have a really soft spot for this, and I really wish that things worked out differently, but this is what was dealt to us, this was the situation, and we made the best decision that we could at the time.”

He added that young players need to know about the selection process before heading to tryouts.

“Moving forward, any of these kids coming up, if they’re going to be a kid that’s eligible to carry a passport, they have to have that passport before they step on the field for us,” said Jemison. “We have to have the verification process down pat.”

Lauder is frustrated, as he sees politics and image playing as motivating the decision to leave him off the team.
“The way I see it, is, I thought they wanted to win,” he said. “I thought everybody’s goal is, ‘we want to win.’ But after all it seems like, ‘how do we want to look?’”

The Eastern Door wrote a story during last year’s world indoor championship about National Lacrosse League defencemen Bill O’Brien, whose father is Onondaga, but mother is Irish-American, and was left off the Nationals squad in place of three other non-passport holders.

Lauder has been working for four years for a chance to show he deserved a spot, and is discouraged at how the tryout process went.

It is the second time for Jemison as executive director of the Nationals, and has been on players’ cases since November to have their paperwork in order.

“That way when it comes time to select the team, the coaching staff doesn’t get put in these situations,” said Jemison. “They all know their situation. We feel fortunate that we had the number of kids we had come and try out. We were excited about that, but then when it comes down to the nitty-gritty and you’re splitting hairs over who’s this and who’s that and it comes down to two midfielders. You could take either one of them and probably be successful, but in the end one of them’s not going to be a part of it. That’s a really tough piece.”

* This story was edited July 5 to incorporate the interview The Eastern Door conducted with Nationals executive director Ansley Jemison after the original story was published.