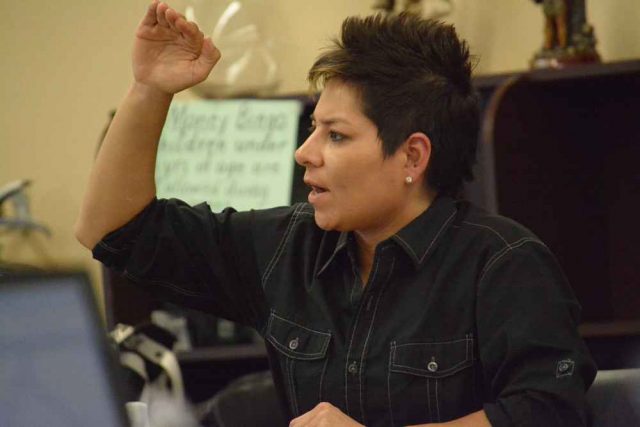 Mohawk Council of Kahnawake membership portfolio chief Kahsennenhawe Sky-Deer was among the resource team on hand for Tuesday evening’s hearing on the Kahnawake Membership Law. (Jessica Deer, The Eastern Door)

It took six meetings, but consensus was finally reached on a substantial definition that will be included in the amendments to the Kahnawake Membership Law.

On Tuesday evening, the two dozen people at the latest Community Decision-Making Process hearing decided that a “Kanien’kehá:ka great-grandparent” must be considered at minimum Sha’teienekwenhsí:hen.

Although the term translates to half blood in Kanien’kéha, for the purpose of the law the group decided that it means “he or she is made up of half Onkwehón:we lineage and half of another culture.”

“Since 2003, we really wanted this clear direction from the community of what the great-grandparent was,” said Alexis Shackleton, director of the Mohawk Council of Kahnawake’s Social Development Unit (SDU).

Although the foundation of the law is based upon an applicant having at least four Kanien’kehá:ka or Onkwehón:we great-grandparents, there’s never been a definition for the term.

“We didn’t really have a guideline,” said Shackleton. “The registrar needs clear direction from the community.”

Since February, the group struggled reaching consensus, but agreed that the originally proposed definition of having “some lineage” was too vague.

The five subsequent meetings have revolved around debates over adding a minimum blood quantum measurement to alleviate concerns, growing frustrations with the process and resource personnel.

Even though the meeting ended with a consensus, it had a rocky start with similar discussions, including criticisms expressed toward the Kahnawake Legislative Coordinating Commission (KLCC) and people sitting at the front of the room.

“What exactly is your role?” one community member asked the resource table, which consisted of representatives of SDU, membership portfolio chiefs and KLCC facilitators.

“It seems very clear from the last meeting – you’re pushing us to a 47 percent and lower. You the table – are pushing us away from the 50 percent when the majority of us want at minimum 50 percent.

“It’s you people who aren’t willing to accept it. All I keep from you the table is lower, lower, lower,” the community member continued.

Mohawk Council of Kahnawake membership portfolio chief Sky-Deer said the word is more liberal than a 50 percent blood quantum criteria, and used herself in a hypothetical situation to elaborate.

“If I decided tomorrow that I wanted to be with a non-Onkwehón:we person, I follow the law, move out and have a child. Because I’m not 100 percent, they’ll be 45 percent. But, still they’ll be Sha’teienekwenhsí:hen,” she said. “Depending on how I raise that child, if they can speak the language, know the culture, if they have family in the community. Are those the people we want to throw away?”

The meeting was also the last scheduled hearing on the amendments to the law before the KLCC goes on summer hiatus.

Not everyone was happy about it.

“Why are we going on summer break? We’re just getting going now. That’s all we’ve been talking about is getting this law passed and enacted, yet all of a sudden we’re going to go on a two-to-three month hiatus,” asked one community member.

Representatives from the organization disagreed.

“I think you’re asking an awful lot of people who work to be here every month. It’s time to rest up. There’s nothing wrong with taking a break in the summer. We’ve done that for the last five years and the world hasn’t ended,” responded MCK press attaché Joe Delaronde, who facilitated the meeting along with Ron Skye.

Many were also confused about what was actually accomplished at last week’s meeting.

“Although we did come to consensus on using the term Sha’teienekwenhsí:hen, a proposal was put on the floor not accepting anything less than 47 percent,” explained Sky-Deer.

However, a press release issued by the KLCC the next day said “preliminary consensus” was reached on Sha’teienekwenhsí:hen as ‘a person who comes from two cultures in approximately equal measures with the proviso of having 47% or more blood quantum,’ despite it conflicting with a previous vote to scrap blood quantum terminology from the law.

“We’re not only going to be known as the Natives with numbers, but the Natives that don’t know how to divide either,” said Ramona Decaire, who sat on the law’s drafting team as a community representative.

Even Sky-Deer pointed out the inconsistency of the definition.

“We’re scrutinizing three generations back and it’s going to affect the applicants of today who are probably more than 50 percent who won’t be able to get membership because you’re making the definition of great-grandparent so high,” she said.