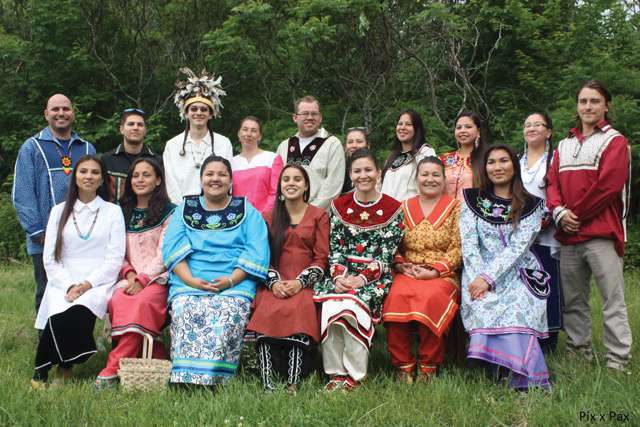 The name on her birth certificate is Rae Skye Katsi’tsaronkwas Brooke Rice, and she’s bringing it back.

The daughter of Paula McComber and the late Thomas Rice’s journey to the Kanien’kéha Ratiwennahní:rats Adult Immersion Program went from Concordia University to New Mexico and back home to Kahnawake.

“There was a point maybe two or three years ago – I was maybe 24 or 25 – and you know where you hit a point in life where you’re just, ‘where am I doing with my life? Where am I going? Where do I see myself?” said Brooke. “I started asking myself those questions and I was at Concordia studying biochemistry, and asking, ‘what am I going to do with this?”

Though interested in science, Brooke didn’t see it as a career path. She began looking up Native artists, designers, models and other artistic media, and her fascination with Indigenous culture grew.

“It’s interesting,” she said. “They have such nice, beautiful work, so I started following a certain amount of people on social media and then one day, one of my friends said, ‘Let’s go to (SWAIA) Indian Market.”

The SWAIA Santa Fe Indian Market is the biggest Indigenous arts and crafts fair on the continent, and the trip south changed her life in a positive way.

“All these people I followed, I met them, and we just clicked and vibed and we became a family,” said Brooke. “I continued to travel there, and go to gatherings, and during the winter break, I’ll go visit friends in Arizona.”

Friendships with Indigenous people in the south led her to language nests that struggle much more than those in Kahnawake.

“I heard them saying how many elders and first speakers they have, and it’s really minimal,” said Brooke.

“I started slacking towards the sciences, and going more towards this because I didn’t learn any of it,” said Brooke. “Now (at Concordia), I’m learning about my history and it’s getting deep: Indian Act, land claims, everything, and it’s pretty sad.”

Brooke went to Centennial Academy and had not been exposed to her culture to the same degree that many of her Ratiwennahní:rats classmates had.

Brooke is not unhappy that she attended school off the territory, however, and knows that she learned much from her friends of all nationalities.

“I was happy that I was able to be immersed with different ethnicities,” she said. “We both helped each other grow because they were able to come to Kahnawake and see how we are, and not have these stereotypes, and I was able to go see them, and break my stereotypes of them.”

When she heard applications were being accepted for the immersion program, Brooke dove in.

“I did it,” she said. “I said, ‘why not?’ I was even confident that I would get into this program, and I thought it would be good, a two-year break from the Westernized-education system. That this would help guide me to what I want to do with my future.”

With very little language ability, the 27-year-old was a step or two behind some of her classmates that had just graduated from KSS, who had less trouble with some of the grammar rules.

“I was jealous that they were able to speak naturally, and that it just comes out naturally,” she said. “Some people were like, ‘oh it’s easy!’ But it’s hard. It’s a hard language.”

Brooke is more confident, but admitted to getting frustrated by rules that at times trip her up.

She added that it’s difficult to succeed in a community that can be unsupportive, which is unhelpful when trying to learn something as difficult as a second language.

“I feel like there’s a lot of lateral oppression in Kahnawake and Native communities across Indian country,” said Brooke. “Anywhere you go it’s like that. It’s crabs in a bucket. Someone’s excelling and they’re like, ‘let’s bring them down. Who does she think she is? Why does he get to go to school and play lacrosse?’ There’s a little bit of negativity there, and jealousy. I don’t know why, but that kind of affects your confidence too.”

She wishes there was more positive reinforcement and hopes more can be encouraging.

“We’re all here to learn, and if someone makes a mistake, don’t laugh, don’t snicker,” said Brooke. “We’re all human beings and no one’s better than anybody else. We’re all equal and we’re all here to fight for our language and make our ancestors proud.”

Her advice to those wanting to brave the world of learning Kanien’kéha is simple:
“Lose your shyness, have a positive attitude,” she said. “This is your family for two years.”