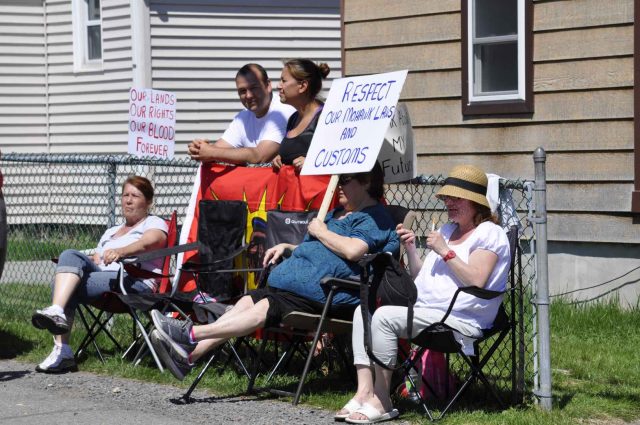 By Kate Sheridan, The Eastern Door

The legal action which will determine if non-Native people can live in Kahnawake with their Native spouses will proceed to trial on November 27, 2017 in Longueuil, as determined in Quebec Superior Court on Wednesday.

Both the lawyers for the Mohawk Council of Kahnawake and the 16 people who filed the lawsuit said they were satisfied with the dates and the witness lists, which were also discussed at Wednesday’s hearing, which The Eastern Door attended.

“We’re pleased that the date wasn’t later,” noted Julius Grey, one of the attorneys for the plaintiffs.

“We thought it might be earlier next year, but we’ll just have to wait and see and hope nothing will happen until then,” said Neka McComber, one of the 16 plaintiffs.

The membership law is currently under review; the last consultation until the fall took place last Tuesday and discussed the issues and wording around requirements to be considered a great-grandparent.

The plaintiffs have alleged that the membership law violated their right to equal protection under the law. Several people stated after Wednesday’s hearing that the law was a Mohawk Council policy; a position not shared by the MCK, who have referred to it as a community-based law.

The council’s previously stated position is that the court case could erode the jurisdictional supremacy of councils throughout Canada.

Witnesses in the case will include current and former MCK chiefs as well as community members and an expert witness.

The MCK sent eviction notices to over 30 non-Native people in 2010, and similarly, anonymous letters were sent just before the lawsuit began in October 2014. Nine additional plaintiffs joined the case in January 2015, before the two sides presented initial evidence to the court. More letters were sent out in November 2015.

The letter added that Kahnawà:kehró:non who live with non-Native people may lose their status “once the Kahnawà:ke Membership Law has been amended. We trust that the wishes of the community will be respected.”

The so-called “marry out, stay out” rule was an unwritten one until it was first implemented by the Mohawk Council of Kahnawake in 1981, when a moratorium on mixed marriages was launched, although it has rarely been enforced over the last few decades.

Cecile Charlie, who was also present at Wednesday’s hearing, noted that she was asked to leave in the 1970s. She described her water being cut and a truck pulling up and waiting to take her belongings. “I had a hard time sleeping,” she said, “but all my relatives supported me.”

Between 1951 and 1985, the Canadian government’s Indian Act forced women who married non-Native men to lose their status; men retained their status regardless of their spouse’s. The Canadian government amended the law in 1985 (Bill C-31) after the United Nations Human Rights Committee deemed it was discriminatory and had breached an international policy on political rights.

It was further amended in 2009 when Bill C-3 allowed for more leniency to gain federally-recognized status, eliminating discriminatory governmental practices.

If the plaintiffs make their case, they may receive some financial compensation, a common result of successful civil cases. The group has asked for $50,000 per plaintiff.

Several plaintiffs agreed that there had been generational consequences, including a lack of a feeling of belonging, because of the eviction requests – with one compared it to the impact of residential schools.