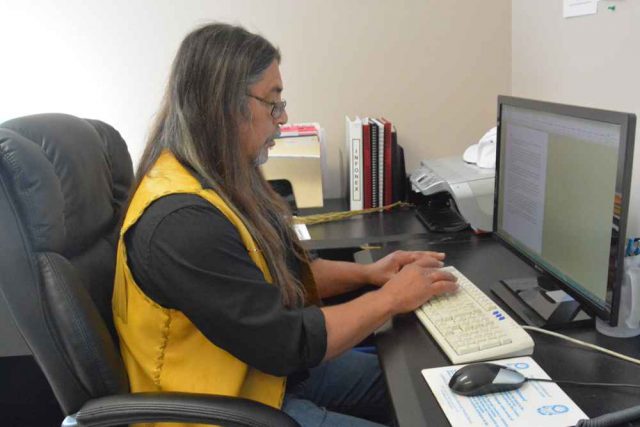 By: Steve Bonspiel and Paul Graif, The Eastern Door

A controversy has erupted over the possibility of a niobium mine reopening, which has resulted in an about face for the Mohawk Council of Kanesatake.

What was only supposed to be an information session by the company Eco-Niobium for the community last Thursday June 2, has instead led to the revelation that several people on the Mohawk Council of Kanesatake and Eco-Niobium are alleged to have been less than truthful in their dealings with the public.

At the invitation of the MCK, Eco-Niobium made a presentation that evening.

Activist Ellen Gabriel and about a dozen others held a protest outside.

“It was a protest to say to Eco-Niobium that they are not welcome in Kanesatake. This is a struggle that the community has had for 17 years,” she said.

“It’s kind of a ridiculous move on the council’s part. We understand we need economic development but at what cost?” Gabriel said.

The information evening was held even after the neighbouring community of Oka recently rejected the possibility of a resurgent mine.

“It would drain our aquifers and contaminate the air and the environment, and it’s quite a dangerous activity, in spite of what they say,” Gabriel said.

After a community member released documents showing a link between Niocan and Eco-Niobium on social media, under the umbrella of Palos Capital Corporation, support for the project from the council started to unravel.

When a community member posted private messages between himself and MCK chief Patricia Meilleur, things started to deteriorate further, and it was discussed at a council meeting on Tuesday.

The messages pointed to a rift in council, and Meilleur alleged two chiefs and a third person supported the project, despite taking a neutral stance in public.

“Yes, we do have issues but are working them out internally,” Meilleur told The Eastern Door. “Council wants to move forward positively so that our community can prosper with all of the important issues we are facing. It (the alleged support of the mine from two chiefs) will be addressed within our council; them facing the community will be another story,” she said.

“We can either continue on this path and cause further damage to each other, and worse, to our community, or we can sit down and speak like adults and face the faults that have occurred,” she said.

“God reveals everything. The truth is out there, finally, relief.”

“I felt that was wrong that some chiefs were still meeting with the Eco-Niobium people even though they knew there was a correlation to Niocan. I could not hold on to the information that Patricia shared with me.”

“Now that the community is aware of the information, the council decides to listen to the people? And stop talks with Eco-Niobium? I feel they don’t have the best interest of our community and our future generations in mind. I don’t trust them to lead our community, any of them!” said the source.

After a week of controversy, MCK grand chief Serge Otsi Simon released a statement Thursday afternoon stating that they are now officially closing the file on the mine.

“As Grand Chief, all I wanted was to see if this was viable or detrimental to Kanesatake and through the completion of the environmental assessment: the community would have been in a position to make an informed decision. It was never up to me or council,” reads his release.

When contacted by The Eastern Door, Simon said he now has a legal exit from the talks with Eco-Niobium.

“I’ve always said from the beginning that this is only to study the possibility. But now that the owner has lied, under the law he is supposed to remain completely truthful and transparent, and he didn’t,” Simon said.

“There’s no connection whatsoever,” Eco-Niobium’s Michel Gaucher said about his company and Niocan. “As a matter of fact there’s a disconnection. Niocan threatened a lawsuit against us not to meet people at Oka.”

Gaucher added Niocan has been mismanaged “for the last 10-15 years,” and Eco-Niobium would now be bowing out because of how divisive the project has become in Kanesatake.

However, he questioned the information protestors brought to the meeting.

“The commentary at the public meeting were so completely scientifically wrong,” said Gaucher, who added he was accused of being a snake oil salesman.

“We would have been willing to bring the experts in to show the people. Unfortunately we didn’t have time to bring this to a scientific discussion. If we had that time, we could have made the point this could have been a windfall for them,” said Gaucher, who said the niobium in the ground has a $6 billion value.

It’s not the first time the company has been called into question. Eco-Niobium has no experience in operating a mine, according to a report prepared on April 12 for “Le Comite des Citoyens d’Oka.”

The Eastern Door has exclusively obtained a copy of the report.

“Niobec (Niocan) has struggled to comply with more stringent standards concerning water emissions during the summer months, when the phosphorous in the water of their lakes leads to proliferation of microscopic algae,” according to the report, authored by Ryan Kennedy.

“Eco-Niobium claims the project will create 250 jobs. What they don’t mention is the number of jobs that will be available to the local population. Indeed, most of the jobs created require specialized skills which are not found in the region,” reads the report.

“It is difficult to assess the impact of a mining project n the agro-tourism reputation of a region, but it seems obvious that such a project would have a significant negative impact,” it reads.

“Niocan has always been in the background here,” activist and local business owner Walter David said.

According to David the report was written in French after five public sessions. After translation, it was presented to the Longhouse in Kanesatake May 24.

David wonders why the grand chief went ahead with the public hearing more than a week later.

“There was enough information there and he should have turned around and said we have a problem, and he didn’t.”

The chiefs were slated to go through conflict resolution to repair damage within the council, however not all of the chiefs were available, according to Simon.

A number of community members are calling for the ouster of some of the chiefs who appeared to be going ahead with the talks, in spite of what the people wanted.

“I am troubled by the events of the last couple of days,” said Eugene Nicholas, who has been vocal on Facebook pages, posing tough questions directly to the grand chief.

“Niocan and Eco-Niobium are linked and the Council did not do its homework, but preferred to continue to push the file, for reasons that are not known,” he said. “We were being lied to all along.”

“The grand chief needs to be held accountable and must recognize that this is a severe violation of the Electoral Code, Section 2 (Principles of Government), in its entirety. These principles must be applied and new elections must take place,” he said.

“I would like to call a non-confidence vote on this council for willfully proceeding without the consent of the Mohawk Community of Kanesatake and for the deception, withholding of information, misleading, and dishonouring the community as a whole,” said Nicholas.