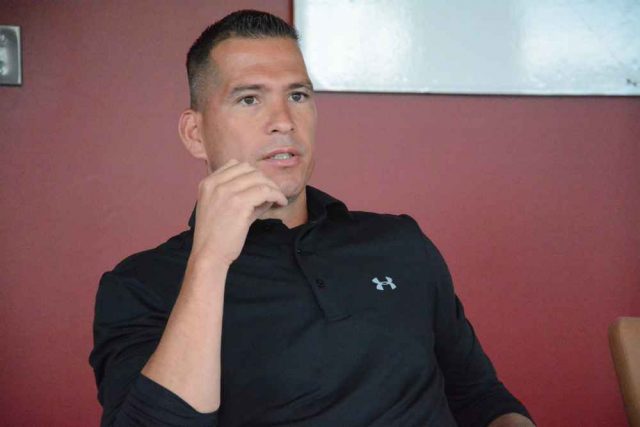 Come spring next year, Mohawk Council of Kahnawake chief Carl Horn hopes many of the community’s ironworkers will be employed on the new Champlain Bridge Corridor Project.

As reported in The Eastern Door last week, Horn announced a Workforce Inclusion Plan to try to increase the number of Kanien’kehá:ka workers on the major project, which will see the construction of a new 3.4-kilometre Champlain Bridge connecting Montreal to the South Shore.

“We want to ensure that we get as many of our community ironworkers on that project as possible,” said Carl Horn, who is spearheading the initiative, along with Tewatohnhi’saktha and the new Kahnawake Labor Office.

The work for the new bridge started last year and is slated to be competed by December of 2018. The installation of the superstructure and deck phase of the project commences this fall and will require a significant number of ironworkers and other construction-related trades people.

The contractor, Signature on the St. Lawrence (SSL) has demonstrated its desire to hire Kahnawake’s ironworkers on the major project.

“Signature on the Saint Lawrence is glad to be collaborating with the Kahnawake Mohawks for the construction of the new Champlain Bridge and would be proud to welcome qualified workers to take part of the project,” said Stéphanie Lassonde, the company’s communication manager. “At peak productivity, SSL will need around 300 ironworkers, a chance for Kahnawake community members to demonstrate their skills.”

The project will also provide around 500 jobs in other construction trades.

On Tuesday morning, Horn and Nicholas, along with representatives from Tewatohnhi’saktha and the Labor Office, presented further details about the Workforce Inclusion Plan to local media.

First, the Labor Office is going to help experienced ironworkers that need certain types of training such as their Commission de la construction du Québec (CCQ) certification, and other project-specific safety training.

“There’s seven qualifications that they must hold,” said Horn. “Two of them are mandatory just to step on the construction site, which is the CCQ certification and the ASP construction card.”

The Kahnawake Labor Office will be assisting Kahnawa’kehró:non throughout the process of attaining the certifications, as well as offer some of the safety training free of charge in the community.

“Currently, there are four Kahnawake ironworkers working on the project. So, we’re looking at increasing that number as rapidly as possible,” said Louis Stacey, coordinator of Occupational Safety and Health.

“You know the old saying. You can lead a horse to water but we can’t force them to drink. Community members who are interested – this is what you got to do. It is right here on a silver platter for you,” said Horn.

“We’ll do our best to assist and direct you in the right direction, but at the end of the day you’re going to have to do your best to try to make yourself available to get the necessary qualifications.”

The other level of training being offered is for those wanting to enter the industry, explained director of Employment and Training at Tewatohnhi’saktha, Steven Horne.

Horne received confirmation from the First Nations Adult Education School Council (FNAESC) that an ironworking apprentice program will be offered at the centre de formation des métiers de l’acier in Montreal this fall.

“The program is normally only offered in French in Montreal,” said Rola Helou, executive director of the FNAESC, which oversees Kahnawake’s regional adult education centre. “They won’t run the program unless there is 22 people. So we’re going to start with Kahnawa’kehró:non and then we’re going to open it up to First Nations communities across Quebec. If we don’t get to the 22 number by September 21, then the centre opens it up to anyone who wants to do it in English.”

The program starts on October 31 from 2:15 p.m. to 9:45 p.m. every day. By August 31, 2017, the group will graduate with a professional diploma in ironwork, with the goal to carry out their apprenticeship on the Champlain Bridge project.

In order to take the program, Helou said students must have either a high school equivalency or must have completed secondary three. However, even the ones who don’t meet the requirements, they can do the necessary upgrading at the First Nations Regional Adult Education Centre in Kahnawake.

“We want to make sure that we facilitate from A to Z these ironworkers to get training and then to go into the job market right away. To do that, we also have ties with CCQ (Commission de la Construction du Quebec),” said Helou.