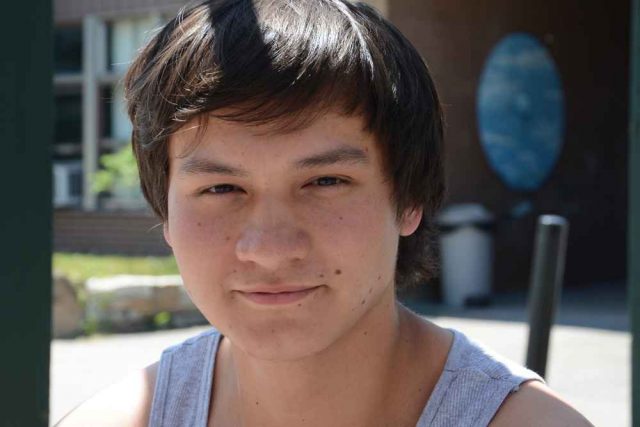 Skahtehrí:io Goodleaf turns 20 in July and will take his language and culture with him wherever he goes, as he continues his lifelong journey of learning Kanien’kéha and the ways of his people. (Daniel J. Rowe, The Eastern Door)

Skahtehrí:io Goodleaf entered the Kanien’kéha Ratiwennahní:rats Adult Immersion Program two years ago ready to learn and absorb as much of his people’s language and culture as possible.

The Kahnawake Survival School graduate always chose extra Kanien’kéha classes in high school and was eager to learn. He wanted to learn more like he did in elementary school rather than the classroom setting of high school that he found lacking at times.

Goodleaf looks back fondly at his time at Karihwanó:ron School when he was young, and wanted more of the setting he found as a young boy.

“It seemed more like a small family,” he said. “It seemed more natural there, the language. I find how we try to teach nowadays is too institutionalized. It takes away from it so much.

“It’s about marks and grades, whereas when I was there, you just want to learn. It’s about language preservation and not so much about marks.”

Goodleaf often thinks about how to make language lessons more productive and exciting for students in high school.

The Ratiwennahní:rats program sounded perfect from the start.

“When I first heard about it, I was in grade 10, and I wanted to join the program right away,” said Goodleaf. “It was always important to me. I always felt that it was something I had to do, that it was my responsibility to learn it and pass it on.

Speaking, reading and writing was important, but in addition, Goodleaf wanted a closer connection to his culture.

“Also, I wanted to learn more about our ways,” said Goodleaf. “You can only get so far with English. When you’re speaking Mohawk, you can understand a lot more about what’s going on. For example when you’re in the ceremony.”

Understanding the language, for Goodleaf, adds something that simply knowing the gist of what’s being said does not.

“You can have someone translate it for you, but until you really know the language, you can’t really get the whole concept of it,” said Goodleaf, who now understands and speaks at times during longhouse ceremonies. “Whenever I go, I pretty much understand everything they’re saying.”

He does struggle at times with elders who speak older words he doesn’t understand. Goodleaf, however, keeps a journal with words and phrases that continues to grow. He feels that in the future, effort should be placed on improving how the language is taught.

“There are ways that we can provide the language better,” he said. “I find the way that it’s taught in high school discourages a lot of people. I really wanted to learn the language, but if I didn’t have that drive, I’d probably fall off the boat the same as other people.

Goodleaf’s response to such criticism is simple.

His older sister Karennenhá:wi is also in the program, giving both someone close to speak to regularly.

Skahtehrí:io now plans to upgrade his science courses before continuing his educational path in the health sciences.

“I always wanted to be a teacher, but it looks to me like there are quite a lot of teachers coming out of this,” he said.

Wherever he goes, Skahtehrí:io will continue learning and practicing his language.