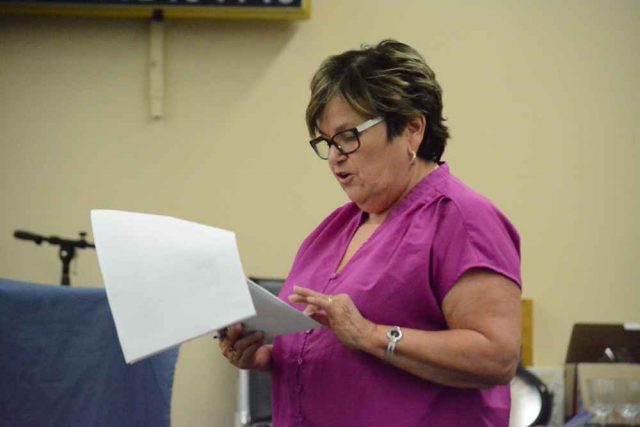 No Tobacco Day may have been observed across the world on Tuesday, but for a dozen community members, moving forward with the implementation of a proposed Kahnawake Tobacco Law was priority.

Tuesday’s meeting at the Golden Age Club was the fourth meeting scheduled in the past year-and-a-half aimed at reviewing the draft regulatory law through the Community Decision-Making Process.

The meeting kicked off with discussion on the election process for the law’s proposed tobacco regulatory commission. The nine-person body will consist of three community members who are not employed or have any financial interest in the tobacco industry, and six industry members to represent manufacturers, wholesalers, and retailers.

Consensus was reached on all 35 clauses in Section 6 that were reviewed, with only two changes proposed and accepted.

Throughout the entire meeting, the discussion was sparse, with most questions coming from facilitator Dale Dione, as well as council chiefs that were in attendance.

“What happens if there’s a tie?” asked Dione, regarding clause 6.22, which states that the three eligible candidates that receive the most votes will be declared the members in an election.

“It’s up to the electoral officer – he’ll have to deal with that,” said Kahnawake Tobacco Association (KTA) member Brian Delormier. “Ask for a recount, toss a coin.”

“Within the electoral procedures that currently exists (for the MCK) the electoral officer has the deciding vote only if there’s a tie,” said Peggy Mayo-Standup, who works for the KTA.

Consensus was eventually reached to add a provision to the clause that states: “In the event of a tie, the elector officer will either cast the deciding vote or determine a process to break the tie.”

Dione proposed another question regarding Section 6.28, which deals with the removal of a commissioner from office.

“What could qualify as a breach to warrant a removal from the board?” she asked.

“Somebody is paid off, somebody is favouring somebody else, doing things they’re not supposed to be doing – this is all a part of the regulations,” responded Delormier.

“It will be a part of the regulations,” was the common response from Delormier and fellow KTA representatives Devery Bauersfeld throughout Tuesday evening’s meeting.

“There’s still a lot of work that has yet to be done and that’s why we were told when we wrote this law by the lawyers that these are basically headlines of what’s needed in the law. We know these comments and questions have to be answered. That’s how they’re going to be thrown out. The why is all going to be in the regulations,” said Delormier.

Questions were raised again regarding 6.47 and 6.48, which states commission members must abstain from participating in a portion of a meeting or voting in any decision that affects themselves or a member of their immediate family.

“Even with chief and council – if we’re in a conflict, we can still participate in discussions, we just don’t vote,” said MCK chief Kahsennenhawe Sky-Deer.

“We have to show that we’re not giving any favouritism whatsoever,” said Delormier.

“If they’re being accused of something, they will have a chance to rebuttal and defend themselves,” responded Bauersfeld. “It’s in the regulations.”

Another question was raised about what constitutes an immediate family member.

“Family – whether it is your brother, your sister, your children, your wife, your mother and father. If it’s your girlfriend or boyfriend, it’s not your immediate family member,” said Delormier.

Tobacco portfolio chief Gina Deer expressed that the integrity of the commission would be impacted if a member discusses an issue related to their girlfriend or boyfriend.

“Maybe you’re not married or it’s not legal, but don’t tell me that this person you’re sleeping with, you’re going to go against them,” said Deer. “When you’re that close to somebody, it is definitely going to impact the decision.”

Consensus was reached on a proposed addition of “or significant other” to the description.

Consensus was also reached on Section 7, which outlines the powers and duties of the commission to grant, suspend, renew or revoke certificates or other authorization for tobacco brokers, growers, processors, suppliers, manufacturers, wholesalers, trailers, and transporters.

The section also includes 14 responsibilities, include enacting and administering regulations that prescribe quality of standards and controls of tobacco products, employment standards, as well as standards for health, safety, security and environmental protection, as well as any other regulations necessary to carry out the commission’s mandate.

“All these duties here – every last one of them – the commission is responsible for them. But it means that the commission itself is not going to do all this. We’re going to hire people – professionals in that area to help us out, but, it’s within the commission’s power to do so,” said Delormier.

The meeting concluded just before 8:30 p.m. with one more concern brought forth about the infrequent hearings. The next meeting is scheduled for June 28, however Mayo-Standup said it’s not soon enough.

“It’s a month away from now,” she said on behalf of the KTA. “A month is much too long because the summer holiday is coming up in July and nothing gets done. I hope that we can get another date in so that we can finish it.”

Representatives from the Kahnawake Legislative Coordinating Commission, which is responsible for scheduling the meetings and overseeing the process, said they would look into the possibility of adding another date.