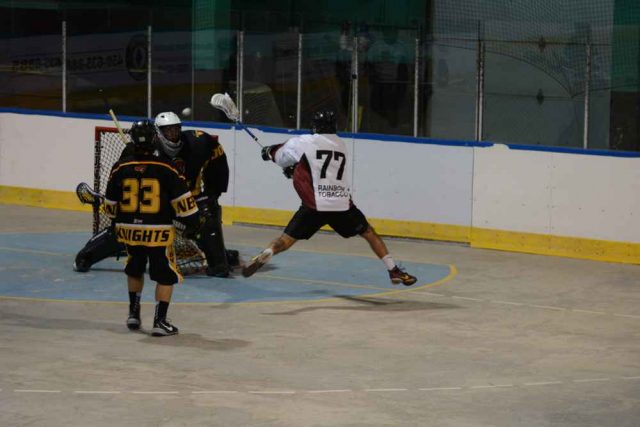 Brine Rice spent more time shooting on the Knights’ net than defending his own Wednesday night, as the Hunters got the result the team’s been waiting for all season. (Daniel J. Rowe, The Eastern Door)

It was the relieving sigh of appreciation from Kahnawake Junior B Hunters’ fans Wednesday night, as they left the Kahnawake Sports Complex having witnessed a game they knew was possible, but that had just not happened this season.

“It feels good to be back on the win streak, obviously,” said Brine Rice, who had two goals and four assists in the game. “We just got to keep it going with the team. No downs from here.”

An added bonus Wednesday night was the lack of minutes the Hunters played short handed. The Hunters had just 12 minutes of penalties in the game.

“We stayed out of the box, and we moved the ball on offence,” said Poe Albany, who had eight goals, two assists and zero penalty minutes. “It worked out pretty good.”

Wednesday’s win came after Kahnawake lost twice on the weekend in Oakville and Halton Hills, and desperately needed to change course to save the season.

The quality of performance Wednesday suggests that this weekend’s home games against the Newmarket Saints Saturday night and Markham Ironheads Sunday afternoon should be ones Kahnawake can take.

“I think we’re still just finding our way with each other, just finding that click,” said Rice. “I think we found it today. We looked pretty good out there.”

The Hunters’ skill has never been in question, but the team’s ability to win games has. The issue, as heard from players, coaches, fans, owners and the guy selling pogos, has been the same: discipline.

“We don’t stay out of the box, including myself,” said Albany. “It’s tough when we’re in the box the whole game.”

Albany has been ejected in a number of games this season, and was forced to watch his team lose in a couple when serving a suspension for lack of discipline.

“It was tough just sitting there watching the boys play and we’re struggling and I know I can help them contributing with points, and it’s tough sitting out,” said Albany.

On the weekend, Albany picked up a game misconduct for unsportsmanlike conduct against Oakville, and ref Ian Garrison gave him an unsportsmanlike penalty in the third period of what would be a one-goal win for the Halton Hill Bulldogs.

“Saturday’s game, I was in the box, and ended up getting tossed from that game,” said Albany. “Since then, I’ve controlled my temper and don’t say anything to the refs.”

It’s easier said than done at times, and Albany, an emotional player, knows this.

“It’s not easy,” said Albany. “I just put my head down and walk to the bench.”

Fighting officials that know Kahnawake’s tough brand of lacrosse is no easy task. Rice spoke about how frustrating games are he knows could have been wins – if not for the penalties.

“There are refs out there that make not the greatest calls, and we notice it, and try to get a call our way, and it doesn’t happen and the next thing you know, it’s all a raucous from there,” said Rice.

“The refs just don’t put up with it anymore. They already know the Hunters and everything over the past years, and they’re not tolerating anything.”

Hope is not lost for the season, however, and Wednesday’s win was huge. Kahnawake is 3-10, but just four points back of the Gloucester Griffins at 5-7.

With seven games left in the season, including three against the Griffins, Kahnawake is in no way out of the playoff race.

Wednesday’s game raised over $1,900 for the Step by Step roof repair with all proceeds going to the local childcare centre.

Hunter owner Derek Fleischer said, “we provide the entertainment, the fans give to Step by Step,” in thanks to those who showed up and paid to help.