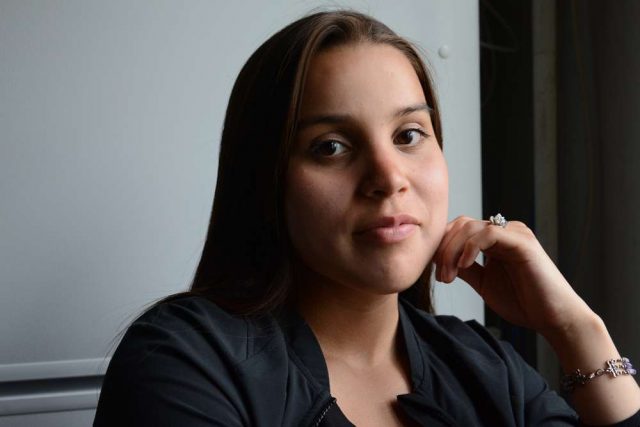 A baby boy on the way, Dade Hemlock, the youngest in the program, intends to continue her journey exploring the language and culture with her son by her side. (Daniel J. Rowe, The Eastern Door)

The youngest student graduating from the Kanien’keha Ratiwennahní:rats Adult Immersion Program will soon have the chance to teach the youngest person in her family her language.

Teionakerahserá:ke Dade Hemlock, 19, and fiancé Miles Thompson will welcome their baby boy in early July, and Dade is ready to pass on the language she has spent the past two years immersed in, to her son.

“My main goal is to raise my boy speaking to him in the language for him to know our culture, history and our ways in the longhouse,” said Hemlock. “That’s my main concern… So he won’t grow up not knowing – the way I was raised.”

She plans to bring her baby along when she visits an elder she met in the program, who speaks Kanien’kéha with her.

“(Teacher) Akwiratékha (Martin) once told me how lucky we are to be able to go speak with first-language speakers because who knows, your kids might not be able to grow up with them, they might not be here,” said Teionakerahserá:ke. “That’s one way I will raise him, being around elders.”

The Kahnawake Mohawks’ soccer star knows, however, that in the end it is up to her to ensure her boy grows with the language around.
“It’s really on me,” said Teionakerahserá:ke. “I have to talk to him. That’s my responsibility, and my role.”

Hemlock is the daughter of Amy Rice and Guy Hemlock and grew up close to her grandparents Anna Mae Rice and the late Wayne Rice. She is also close to her father’s mother Paula Hemlock.

Teionakerahserá:ke is the only one in her family that can speak Kanien’kéha with some fluency, and decided to enter the program in grade 10.

“It was actually perfect timing because I was graduating from Kuper (Academy) and they were just starting their new group. I saw it as a perfect opportunity because I’m young,” she said.

Hemlock said she retained a good deal of the language she learned while at Karonhianónhnha School and it helped her ease into the program with little difficulty.

Attending high school in the west island, Teionakerahserá:ke felt compelled to reconnect with her culture and engage with the language.

“I just knew that there was something missing because I went to an outside school and it was a big culture shock to me,” she said. “I never really understood how important it (the language) was. Growing up, you learn how important it is that you should learn it.”

According to her teachers (Martin and Ryan DeCaire), Hemlock was one of the brightest and most eager students.

She is happy she decided to study the language at the age she is rather than waiting.

“I’m like a sponge right now, and I just absorb all these words and all these phrases and sentences,” said Teionakerahserá:ke.

She said her family values education highly, and feels both her mother’s path through university and her journey through the language program are equally important.

“My mom works at MBC (Mohawk Bridge Consortium) and before that she worked at Tewatohnhi’saktha, and I see in my family that schooling was really important,” said Teionakerahserá:ke. “I encourage both worlds. I want my son to learn the language, yet go off to school as well.”

She has not ruled out further education via CEGEP or university, but is focused on her upcoming motherhood, and teaching what she has learned.

“I just took it upon myself to carry on the language,” said Teionakerahserá:ke. “It was just ownership and I see the importance in it, and it’s something I like doing.”

The language lessons have already begun extending to her significant other.

Thompson, whose mother is from Onondaga and father from Akwesasne, is the second youngest Thompson brother known throughout the professional lacrosse world, and asks Teionakerahserá:ke to speak to him in Kanien’kéha.

“It’s kind of hard for me right now because I’m not that fluent,” said Teionakerahserá:ke. “I can talk, but I still have a lot of years of learning. Sometimes I speak to him, and he’ll understand because his grandparents used to speak to him.”

She added that Thompson understands some Onondaga as well, and hopes their baby can learn both languages.

Over the past two years, she enjoyed the challenge of learning the language, and particularly enjoyed moments when students left the classroom to speak to elders and other field trips.

“I wish there was one more year left, I wish it was a three-year program,” she said. “I just enjoyed this program so much, and am happy that I applied to it… I’m really sad it’s coming to an end.”