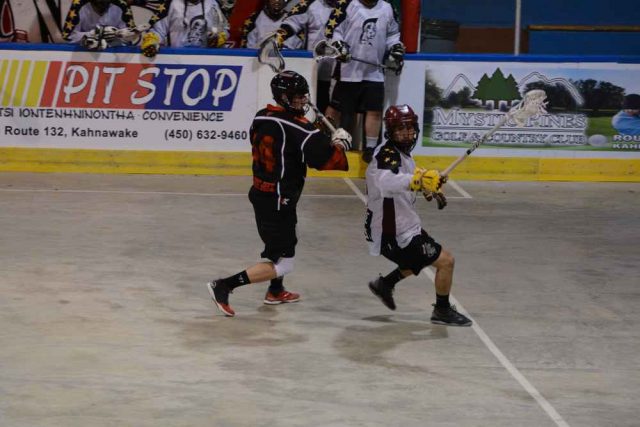 The Caughnawaga Indians felt the same heat their cross-town rivals the Kahnawake Mohawks felt Sunday and fell to the Capital Region Axemen by a sizeable margin. (Paxton Phillips, The Eastern Door)

The Capital Region Axemen dispatched both the Kahnawake Mohawks and the Caughnawaga Indians in back-to-back wins over the weekend during Quebec Senior Lacrosse League (QSLL) play.

Kahnawake’s general manager Greg Horn called Saturday night’s game in Nepean, Ontario an “eye-opener” for the Mohawks, who trailed in score for nearly the entire game. It was the first time the two teams faced each other since the 2015 QSLL finals.

Unfortunately it didn’t go well for the Mohawks, who trailed 10-1 after the second period.

“I think it was just one of those games where it seemed we couldn’t do anything right,” said Horn. “The ball couldn’t find the back of the net and it’s hard to put a finger on any specific reason why it wasn’t our night.”

The teams racked up a total of 100 penalty minutes during the game, including 17 each from Capital Region’s Bergin and Kahnawake’s Mark Kirby. Bergin and Kirby dropped the gloves in a rare fight that ended up more of a wrestling match. Both players were ejected with the Axemen leading 7-1.

Undisciplined penalties by the Mohawks led to several back-to-back penalty-killing situations. The Axemen’s Mark Vradenburg scored twice on the powerplay in the first period, building on what would become an insurmountable deficit for the Mohawks to claw back from.

Kahnawake’s Ky Horn, who assisted on two Mohawks’ goals, said most of the team’s penalties were unnecessary and costly, coming during scrums after the whistle.

“We can’t really win games when we’re playing in the box for 40 minutes,” he said. “That was our problem. We weren’t able to stay disciplined from the get-go.”

GM Horn said the team needs to play with more discipline even if it’s their hard-and-tough style of play that lands them in the penalty box.

“If we want to be the best team in the league we have to show the other teams that we mean business and we’re going to play five-on-five the whole game,” said Horn. “We can’t let penalties and the refs get under our skin to the point where we’re not going to be able to play the game that we want.”

A bright spot for the Mohawks on Saturday may have been the play of Ben Green, who lit the lamp twice. Horn said the veteran player had a “really good” performance, showing his ability to score goals in situations when other players can’t.

On that note, the general manager said he’s confident the entire team will gel and connect more as the season progresses.

Ky Horn added that the team was moving the ball well on offense and had several scoring opportunities. They just couldn’t put the ball in the net.

Next up for the Mohawks is a home date against the Tyendinaga Thunderbirds (0-1) Saturday May 28 at 8 p.m. It’ll be the first time the two teams play each other, since scheduling problems prevented any contests last season.

Ky Horn said the Mohawks will look to improve conditioning in practise this week after a slow start against Capital Region.

“A lot of lacrosse is making sure that you’re in shape and you’re constantly moving your feet, so we’re trying to make sure that everybody’s in shape and ready to go,” he said.

The next day the Indians (0-3) hosted the Axemen for a Sunday afternoon tilt at the Kahnawake Sports Complex. Capital Region shelled Caughnawaga in a 19-8 win.

Bergin stayed out of the penalty box and put up a whopping nine points (4g, 5a) in the 19-8 win. Curtis Singleton added seven points (2g, 5a) for the Axemen.

Indians owner/coach Eric “Dirt” McComber said he didn’t have a full roster on Sunday, as work issues and other issues have held potential players out of service.

“I’m still working on getting my roster set, but I have to play with what I have at the moment,” said McComber. “As the year goes along we’ll get stronger, but for now guys need to step up to the plate and do their jobs.”

The coach said the team played poorly on the defensive side while the entire team needs to start communicating better.

For the Indians, it was a minor improvement over their performance against Capital Region just two weeks earlier. At the Howard Darwin Centennial Arena in Nepean, the Axemen took out the Indians 20-6, riding the shoulders of a 10-point performance by Bergin.

Sunday’s matchup saw some bright spots for the Indians. Both Lee Thomas and Jason Thompson scored twice, while Shane Francis assisted on three of the Indian’s eight goals.

“[Thomas and Thompson] work pretty well together and they had a nice give-and-go on one of the last goals, so hopefully it can be a bit of inspiration for the team,” said McComber. “Everything will pan out in the games to come.”

Caughnawaga takes on the St. Regis Braves on Friday night in Massena, New York. McComber said he anticipates on having a bigger roster against the Braves, but he’s still in need of left-handed shooters.

“Right now I’m just trying to make sure I have two goalies and at least 15 runners. Again, I have to make do with what’s there,” he said.