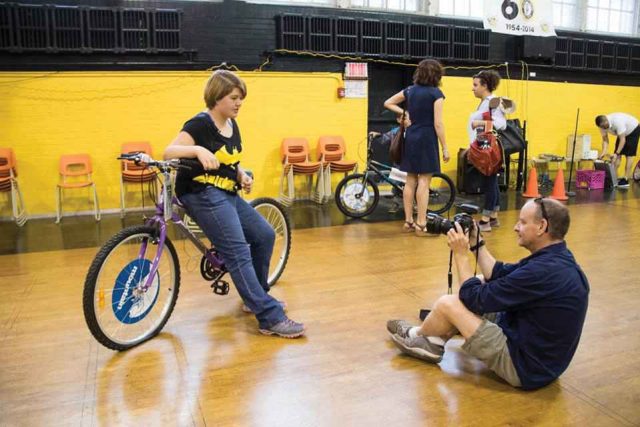 Kaidence Douglas has had to overcome bullying, stress and frustration as she battled dyslexia throughout elementary school, but her perseverance and determination has helped her overcome it all, and nabbed her a bike. (Courtesy Kellyann Meloche)

There are many students with different disabilities that struggle through elementary school watching their peers advance more quickly, and get discouraged. Not so for Kaidence Douglas, who has persevered despite being diagnosed with dyslexia, and was awarded a bike by Sun Youth this week.

“I have dyslexia and I’m being very successful in what I’m doing,” said Douglas, 13. “I haven’t been good at doing reading, but I’m succeeding so far.”

Douglas’ mother Kellyann Meloche submitted her story to Sun Youth, as she has watched her grade six daughter strive.

“She fights past anxiety, and other social fears just to be part of every day life,” said Meloche.

Douglas was diagnosed with dyslexia in grade four after struggling through her early years of elementary school.

“Before grade four, she always thought she wasn’t as smart as the other kids,” said Meloche. “Her friends were reading ‘chapter books,’ and she was still learning ABCs. They were writing stories and she was learning how to correctly write the letter B. It was tough and I always knew it brought on anxiety and depression because of her struggle.”

Douglas said she has been able to succeed by using the simplest of tools: effort.

“I’ve been through a lot, and I guess I try my hardest and got to this point,” said Douglas.

The Mary Gardner School student repeated grade two because of her disability, and said she finds it hard to find people who can comprehend what she is going through.

“A lot of people don’t understand it, and only two people do understand it and one of them has dyslexia,” said Douglas. “The way I explain it is that it’s harder for me to work on things than other people.”

Her mother, as well, has had to learn to see things from her daughter’s perspective.

“There are times when I just want to say, ‘pull up your socks and just do it!’” said Meloche. “I can’t see it from her perspective, and she teaches me.”

The two big things that people with dyslexia struggle with are reading and writing. Two common misconceptions are that those with the disability have poor eyesight or are lazy. Neither is true.

Dyslexia is a common condition that affects the way the brain processes written and spoken language. It primarily affects reading, but can also affect spelling, writing, and even speaking skills, according to the dyslexia resources Canada website.

Detecting that she has a disability is nearly impossible when speaking to Douglas, as this reporter can attest. Her mother is continually impressed with her ability to persevere through her disability.

“Talking with her, you’d never know,” said Meloche. “She’s very mature and articulate with her words. I love how she’s growing into a great young woman and helping others understand what it is.”

Douglas said she is generally the last person to complete tasks in her class, which can be frustrating.

“I would probably celebrate with a cake if I got it first,” said Douglas.

“I’m very, very nervous,” she said. “I’m getting bullied in my school because of my dyslexia, but there’s a help program over there for people with dyslexia that are also Native, so that’s probably what I’m going to go into.”

Modern communication involves more text and reading than in years past. Very few appreciate when someone corrects grammar or spelling via text or Facebook message, but not so for Douglas.

“I have a friend that’s online and I always text them, but they reply back correcting me, and helping me out too,” said Douglas.