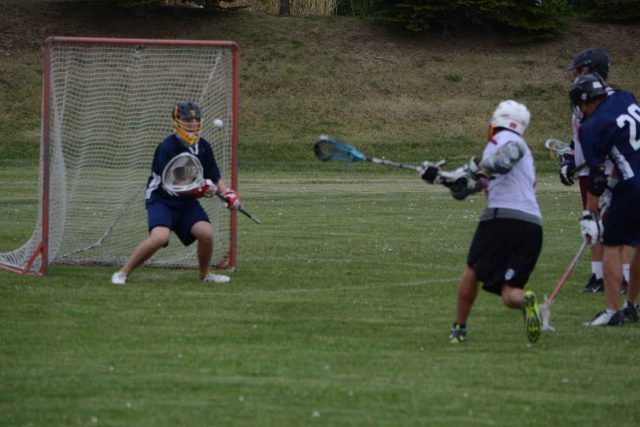 Kahnawake Survival School jumped out to a four-goal lead at half and held off Kuper Academy’s offence to win 7-5. Billings awaits. (Daniel J. Rowe, The Eastern Door)

Four-time champions Billings played against a rejuvenated and tough Pierrefonds Comprehensive High School at home yesterday, and hung on by the narrowest of margins to win 8-7.

“Somehow we pulled it off,” said attacker Stone Jacobs.

Billings was up 8-6 in the fourth with six minutes left, and battling through penalty after penalty, while the clock ticked. Pierrefonds scored another to squeeze the lead to one goal, and continued to press.

Billings wound up without forward Tyson Two-Axe, who was ejected for arguing with the official after a number of highly questionable calls including a disallowed goal.

In the end, Billings pulled it off and keep home field advantage for today’s finals.

Young up-and-comer Koleton Marquis had a stellar game scoring a hat trick including a round the world goal that had the older kids on the team smiling.

Survival continued to lean on its offensive prowess in the third and kept Kuper’s attackers at bay and entered the fourth up 7-3.

Goalie Karonhiakeron Dickson caught a couple of breaks when Kuper shots rattled off the post in the frame.

“They were pressing very well, and a lot of pressure on us,” said Dickson. “But I had confidence in my defence.”

“I was really impressed with Keron and our small defenceman Kobe McComber, he played excellent,” said Rice, who had five goals and a helper in the game.

Kuper did what Kuper does in the fourth and pushed the game scoring two and taking shot after shot on Dickson.

“That was a tight one,” said coach Eddy Dickson, who had some words for his number one goalie (and son). “We had a lot of confidence in him, but the net’s as big as it is, so you never know. He made so really good saves and stood up strong. It was almost his best game of the year.”

Billings has had KSS’s number reaching back to last season, when Billings beat Survival by a goal to retain the quarter.

Last week Billings beat Survival 9-6 May 18, and will look to make it five championships in a row.

“We have a game plan for them now,” said Eddy Dickson. “We won the last quarter of that game against Billings and we set some strategies out and figured some things out. We have an answer for them.”