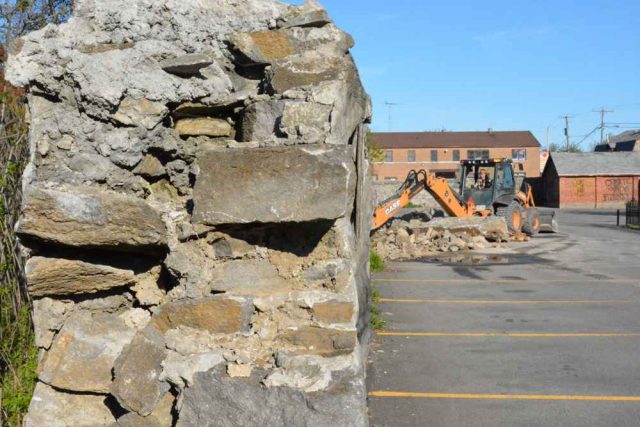 Within the constructs of my own memory, the stone wall that traces the parking lot of Kateri School and along the north end of the land along the St. Lawrence River acted as a symbol of my community experience and served as a backdrop to my growth as a person.

From my early years as a student attending Kateri School, I have many innocent recollections of recess time, bus boarding and picking the “snake tongue” vines that crawled over the top of the stone wall for imaginary play with my peers.

I have plenty more memories built along this wall that have been gathered as a 16-year veteran of the Turtle Island Theatre and drama camp attendee and counselor, where hundreds of improvisation games and learning activities were played from both within and around Kateri Hall.

In fact, much of our outdoor experience revolved around games and learning opportunities behind the catholic church and directly along the wall itself.

And while not playing a functional role in my life, the stone wall has evidently acted as a foundational support in my upbringing as a child and into adolescence.

It was a seemingly invisible symbol for the spaces that I loved the most, where the friendships that felt the deepest where created and where I constructed the identity that I hold today.

The wall, it seems, was the centre of all the establishments that contributed to my growth as person.

As a result, it came as no surprise that I felt as if a part of my own childhood was demolishing as part of the wall was taken down last weekend.

But in taking a breath and with further reflection, I realized that I had no knowledge of this wall, its history or its purpose beyond the memory of my own life.

And so I began to research the foundation of this wall and was genuinely conflicted with the information I had found.

The wall, originally constructed in the 1700s, was built as a defensive unit and military base for the French army who occupied the Kahnawake community, which as a reservation was only established in the late 1600s (although Kahnawake has been in its present location since 1716).

As a secondary function, the wall acted as a structure to protect the economic interests of the community, which was primarily the fur trade.

In fact, the Kahnawake area was a citadel of the North West Trading Company, a major trade route along the St. Lawrence River, and thus a hot spot for economic flourish. It seems that a wall was necessary to protect the resources that Kahnawake had to offer.

But the question was, for whom?

So in shedding the initial purposes of the wall from the military and economic perspective, this question reveals a much more damaging and sinister reality within the very structure of the wall itself.

Built between the longhouses of the Kanien’kehá:ka population and the French colonists and military, the wall came to symbolize the power relationships resulting from colonization.

The literal separation of people via stone wall came to reinforce oppression and solidify the roles of oppressor and the oppressed. It came to symbolize hierarchy, power, dominance, privilege, and the damaging black and white stereotypes we continue to deconstruct today.

In fact that wall represents 300 years of colonization just within the boundaries of Kahnawake territory, yet has continued to stand as an invisible wall of history and a relic of oppression in our community that we so innocently came to accept as part of our lives.

So now here I stand three centuries later, watching the remnants of the wall erode and break away into a heap of rubble gathered at my feet. I feel remorse as memories of childhood and adolescence turn circles in my stomach and I feel a sense of loss because a historical symbol of our community’s growth is demolished.

But I also stand in awe knowing that the wall has witnessed the transformation of a day school into an elementary school that strives to honour our culture.

I stand knowing that the wall holds memories of the withdrawal of the Indian Agent, and the birth of self-determination.

I see our own council buildings and governing bodies erected around the wall as well as youth establishments that have strongly contributed to the health of our community.

And that is the beauty of stone.

Because stones are the knowledge keepers of the land and have gathered the histories they have witnessed throughout time.

They help us to grow as our mentors and teachers on the land as we build and maintain relations with them.

It is through these relations that we have access to teachings, ceremonies and sweat lodges as Indigenous people that allow us to grow with them.

And with this knowledge in tow, I have come to accept that the wall, made of stone, does in fact carry the history of colonization but it also carries the teachings gathered from centuries prior to its construction and all the beautiful memories collected afterwards.

Those stones have more power and meaning in them than what the French bestowed upon them 300 years ago.

So with this in mind, I feel at peace with the deconstruction of the stone wall because it demonstrates that the teachings of our culture can outlive any symbol of colonization.

What do you think about a portion of the historical wall being demolished?

Adrianna Garisto: I think it’s so sad. It’s a part of our history. However, if it’s a safety issue, I understand.

Stan Myiow: Tear it all down. Any remnants of the church and the fort are a manipulated through Christianity.

Timmy Norton: My opinion is that they should find money, fundraise or something. That wall is an extremely important part of history. It should be rebuilt.

Laurie Montour: It’s sad and shocking to see the gaping segment. It’s been part of the Kahnawake landscape forever and it’s odd to see the jungle that thrived behind it. My daughter and I hope it will be restored.