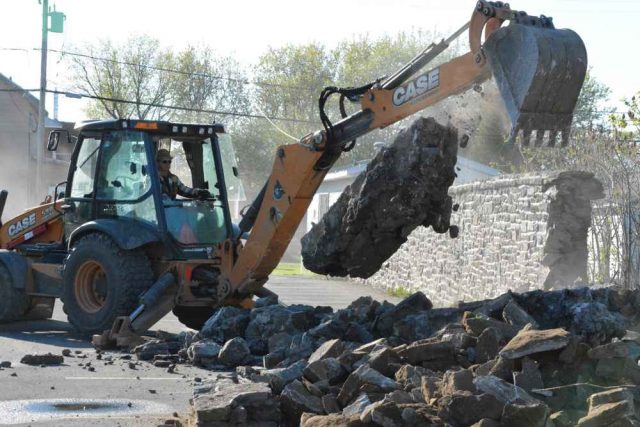 Few community members stopped by Saturday to witness the dismantling of something that has been a part of Kahnawake’s history for so long. (Steve Bonspiel, The Eastern Door)

When Cross examined the eastern corner of the wall, he feared for the safety of students and teachers who play and park alongside it.

“The wall was bulged out and there were a couple of openings,” said Patrick Ng, a civil engineer who has been at the Mohawk Council’s Technical Services for 24 years.

Ng inspected the wall on Monday, May 9, and within five days a significant portion of the wall – roughly 100 linear feet – was torn down.

“Some rocks, maybe eight or nine inches, had already fallen, so I made recommendations that the wall was dangerous. There were also a few openings in the wall, so if people got close to it, it could have fallen on them,” he said.

Public Safety inspector Dennis Leborgne has been keeping an eye on the wall for nine years and he backed up Ng’s recommendation.

“It has been progressively getting worse and worse,” said Leborgne. “I usually clean up the grounds a bit so I can monitor the silt that’s falling out of it.”

After Leborgne observed a “35-40 pound rock” protruding out of the wall, he knew something had to be done.

“It wasn’t even concrete mortar anymore, it was just sand, it had deteriorated so much,” he said.

“At one point I thought it was the trees and roots in the back of it that was causing it, but the back side of the wall was in pretty decent shape, and remained that way until they took it down.”

The 262-year-old Fort St. Louis, which was started in 1747 and finished, albeit not completely, in 1754, was originally made of wood – palisades to protect the French, its military and allies within the walls.

It also protected the fur trade and, eventually, the original Catholic Church building, finished in 1721.

Part of the problem is snowplows have hit the wall over the years, causing the dislodging of the historic stone, Leborgne noted.

The entire demolition, which Public Works said cost less than $400, started a little after 6 a.m. last Saturday and took just over two hours, the precision of Mitchell Gilbert’s close to 40 years of experience with heavy machinery making quick work of the fragile walls with his shovel.

“A lot of that stone is not reusable – it’s covered in cement and is broken, which would be another cost,” he said.

When work was done on a different section back in 2003, cement blocks were put in the middle of the wall, surrounded by a foot of stone façade on each side.

“If we rebuild it with the blocks in the middle, with the stone façade, does that affect our ability to go to the Canadian Historical Society and have it deemed a historical site?” Patton asked.

“That was the most affordable way, just to pull it down,” said Patton.

After a school bus hit it in the early 2000s, Public Works’ insurance took care of the bill, but this time around, it might fall to the community to fundraise to get it restored and rebuilt.

Two sides to the story

“This is something we have to ask the community: do you want the wall back up, to spend $100,000 on, or do we take the stone and make a monument somewhere?” Patton asked.

When elder Barbara Martin came back to Kahnawake in 2008, she noticed, there was “a big bubble in the middle of the wall,” she said.

She called then-Mohawk Council chief Melvin Zachary because she was worried the crumbling wall would fall on her oil tank and small house trailer.

The next year, in 2009, Public Works took a roughly five-foot by eight-foot piece of the wall down, but did not replace it.

The Eastern Door asked director of Public Works Brendan Montour where the stones for that piece went, and he confirmed they were no longer behind the Town Garage.

The seven loads of rock from last weekend were taken to Dwayne Kirby’s house on Route 138.

“In a sense I’m a custodian of the wall,” said Kirby, who worked on the wall before and even carted one of the loads to help out.

“It’s part of my neighbourhood. I certainly hope it gets restored. Like it or not, believe in the church or not, that mission is how Kahnawake got to this location, and it’s important to keep that history alive,” he said.

“It’s historic,” said Martin. “Regardless of what is being said, it was our men, our ancestors who made the fort.”

“I say it should stay, but what are the chances of them putting it back up? It’s a lot of money. The cigarette people should chip in and help to fix it,” she said.

“The men and women it was erected to protect are gone and it has served its purpose,” said Nolan. “I see it not as historic but to remind us of a time of war.

“I always found it an ugly part of our history. The French built it to protect Indians because the English and French were at war. Take it down in my opinion, but build a monument with these stones,” he said.

Deer knows full well the fort is a contentious issue, and even the books and reports he has studied on it conflict with each other.

“I’ve read before the Jesuits initially wanted a fort but later on it seems they’re actually petitioning against a fort,” he said.

“I think the Jesuits initially wanted to monitor who was coming in and out of Kahnawake,” said Deer.

Part of the concern at the time for the French missionaries, military and settlers located here was a fear the Mohawks and other Native people in Kahnawake would deal with the Onkwehón:we and British in the Mohawk Valley, bolstering the economy of the south.

Andrew Delisle Sr. figures it must have been in the early 1800s when they started to bring in rocks from a local limestone quarry that stretched from Alwyn Morris’ current house near Kateri Hospital, up to Hooks Point.

He doesn’t think they used stone until then – the early to mid 1800s.

The fort wall was never completed on the eastern side, Delisle said, because Kahnawa’kehró:non didn’t trust the French.

“They didn’t want them to shoot at them with their canons, so they made sure they didn’t finish it,” he said.

“I really think we should preserve that part of our history, whether you’re Christian or traditional or whatever.”

Delisle doesn’t like the fact that such a rich historical area of town, which includes monuments, the church, and the old speakers’ podium – where he was the last chief to address the people in, in the 1970s – is mostly now a parking lot for Kateri School.

“The last time they took down a part of the wall they never rebuilt it,” he said. “They said they had no money.”

Delisle said the Kanien’kehá:ka Funding Association he works for, backed by the tobacco industry, isn’t pulling in cash like it used to, so it can’t help.

“We don’t spend enough time on our history. We have to find a way to preserve it,” said Delisle. “We have to teach our kids who they are or they’ll forget.”