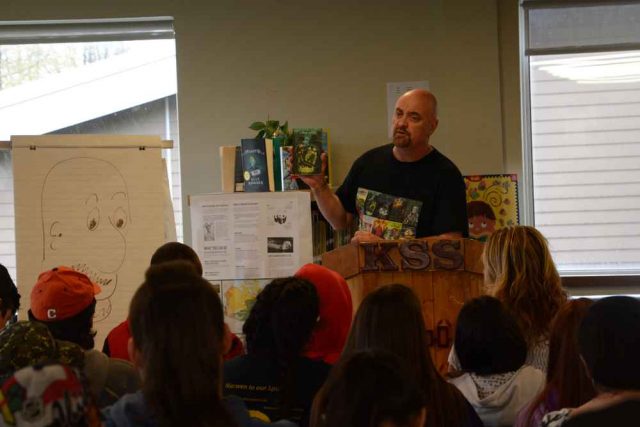 Author Simon Rose did a whirlwind tour of Kahnawake schools Friday to introduce students to the world of time travel, fantasy and adventure writing. (Daniel J. Rowe, The Eastern Door)

What does your world look like? What’s the political structure? What do people trade with? What is the topography? Who are your heroes?

They are questions all authors must ask when writing a novel set in a distant and imaginary land, and the are questions author Simon Rose asked students in three Kahnawake schools Friday.

Rose met and chatted with students at Kateri and Karonhianónhnha Schools prior to setting up in KSS’s library in the afternoon, and brought his blend of wit and humour wherever he went.

“The children loved him,” said Kateri librarian Lylee Williams, who sat with the grade threes and fours during Rose’s talk. “He had a good rapport with them.”

Rose has written over 100 books with titles such as Future Imperfect, Sphere of Septimus, and The Doomsday Mask in addition to a number of non-fiction books. He stopped by Kahnawake as part of TD Canadian Children’s Book Week.

“It went very well,” Rose told The Eastern Door. “The teachers, librarians and children were great at all the locations. It was a pleasure to be there.”

Rose peppered his talks with a blend of charm and energy that the students and staff responded well to.

“I’ve never laughed out loud when an author came,” said Williams. “It’s just because of his wit, and he had good communication with them.”

At the elementary schools, Rose explained to the young future J.K. Rowlings his process in creating worlds that involve time travel, fantasy and adventure.

At KSS, Rose then spoke to the middle school students about monsters, and ran a short workshop, where he asked students to combine animals to make a fantasy creature.

A sharktopus (shark + octopus), ratorich (rat + ostrich), a giraffeaduck (giraffe + duck) and monkpard (monkey + leopard) were some of the creatures that came from the minds of KSS’s grade seven and eights.

“Kids who don’t like to write very much, and were shy were sharing their monsters, so that was nice,” said middle school teacher Donna Boyce.

Boyce spoke with her grade eight class Tuesday about the talk, and what her students learned about writing fantasy and science fiction.

“A couple of them thought it was a neat idea, and they’d never thought about having to create everything,” said Boyce.

“They were into creating characters and so on, but they’d never really thought about having to create the entire world. That was a couple of my more serious writers.”

It was the fourth year Kahnawake has participated in TD’s book week and an author has been sent.

Williams said she was delighted that the program coordinator at the Canadian Children’s Book Centre sent Rose to town.

“We never know what we’re going to get until the author gets here,” said Williams. “We’ve been very fortunate that way.”