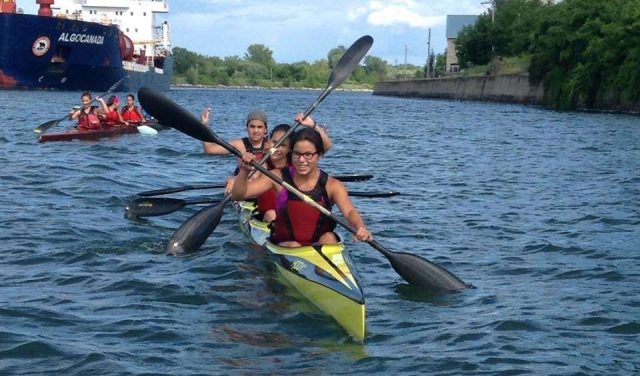 Onake Paddling Club has been a second home for many young athletes during the summer months. (Courtesy Charleen Schurman)

A disco dance fundraising initiative organized by Onake may have been unexpectedly cancelled last week, but new safety equipment is still needed for the upcoming season on the water.

The club, which has been around since 1972, needs to purchase a new motor for one of its safety boats in preparation for youth summer camps at the end of June.

“Our motor is about 10 to 15 years old. It works, but it is not as reliable as it can be. That’s just the nature of it – like buying a car, after so many years you have to replace it,” said Sharon Rice, who has managed Onake for the past 25 years.

“It’s stalled before and when it stalls, sometimes it is not easy to start back,” said Maris Jacobs, a youth kayaking coach, who will be co-managing the camps this summer along with Rice.

The two motorboats are used for safety to pick up kids that tip, as well as for coaching.

“When the kids are in the water, we have a group training and a group just playing in the bay – we always need two motor boats out. One stays in the bay more as safety and security and the other one follows the racing group as a coaching boat,” said Rice.

While tipping is a common occurrence for the beginner paddlers, Jacobs said even the more experienced youth can tip due to waves in the seaway.

“There’s always yachts passing even though they’re supposed to slow down. A lot of them just speed by, so that’s one big reason why everyone tips. There’s waves and it’s hard to help them out when you can’t rely on the motor,” said Jacobs.

On more than one occasion last summer Jacobs said the boat has stalled while they were in the seaway.

“You have to get them back in their boat, to take them out of the water. Help them empty their boat and then they get back in from the safety boat,” said Jacobs.

“When you take a kid out of the water to help them back in their boat, you have to turn the motor off. Sometimes after that, it just wouldn’t start back. It’s just not safe to use it anymore.”

Originally, the parents of club members planned on bringing the Boogie Wonder Band to the Knights of the Columbus tonight. However, low ticket sales forced organizers to cancel the event.

“We needed 300 people to fill the place and that definitely would have covered the motor plus a little extra because they need boats – and boats are expensive,” said Charleen Schurman. “If we sold out we would have made about $5,000, but we only sold about 110 tickets.”

Last week, the parents launched a donation drive on social media, collecting about $10,000 in pledges. The money still falls short of the club’s needs and they are still requesting donations.

“Anything could help. We’re not asking for huge donations,” said Jacobs. “If you could give at least $10, at least something to show that you’re interested because it is something we really need and is really important.”

Onake has become a second home during the summer months for Jacobs and many other young athletes. The Syracuse University student has been a member since she was eight years old.

“As I kid I just went to have fun and to hang out with my friends and train. At this point, I am seeing that in a lot of younger kids and I really want to be there to keep that going,” said Jacobs.

Kahnawa’kehró:non wanting to help Onake reach its goal to purchase a motor and additional safety equipment can contact either Sharon Rice at 450-632-6601 or Maris Jacobs at 514-974-8077.