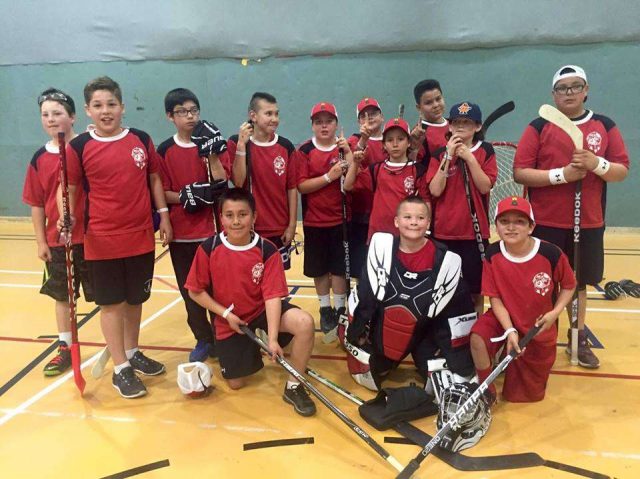 Kahnawake Survival School’s volleyballers followed up a banner year in the GMAA season with champion finishes in both age groups at the games. KSS beat Wejgwapniag School in Gesgapegiag in the 10-15 girls division, and Kassinu Mamu in Mashteuiatsh in the 16-18 mixed team division for the double title.

Kahnawake’s penchant for out-jumping competition was on display in Wendake.

Kahionha’a Nicholas from Karonhianónhnha School took bronze in the 10-12 age category, while Tiakotierenhton Diabo nabbed the gold for KSS in the 13-15 age group. Diabo’s classmate Iaonhátie Deom took bronze in the same division.

In the older division, Santana Cross from KSS took gold with a 3.38-metre jump while Brandon Brascoupe jumped 4.69 metres for gold on the boys’ side. Nic Styres won bronze.

Kahnawake’s elementary schools have some runners. Karonhianónhnha 4×100 M girls team took gold in the 10-12 age, while Kateri School’s boys won in the same age group, nudging Karonhianónhnha’s team by less than a second.

The 100M dash in the 10-12 division was full of Karonhianónhnha’s speedy talent. Iakohatsawakon Cross (silver), Iewnniostha Montour (bronze) and Kahionha’a Nicholas (bronze) all found their ways to the podium.

Montour won gold in the 800M race as well, just ahead of Kateri School’s Charisma Diabo. Tehahente Albany from Kateri won bronze in the boys 800M.

Iaonhátie Deom topped the podium for KSS .3 seconds ahead of Tiakotierenhton Diabo in the 13-15 age, while Rahsakarenhtha Cross won silver in the boys.

Santana Cross booked a silver in the 16-18 range, and KSS went 1-2-3 on the boys side with Nic Styres, Kanerahtens Bush and Brandon Brascoupe filling the podium.

Kan’nikahontesh Montour won silver in the 1200M race for KSS, while Bush topped the podium for the boys in the same distance.