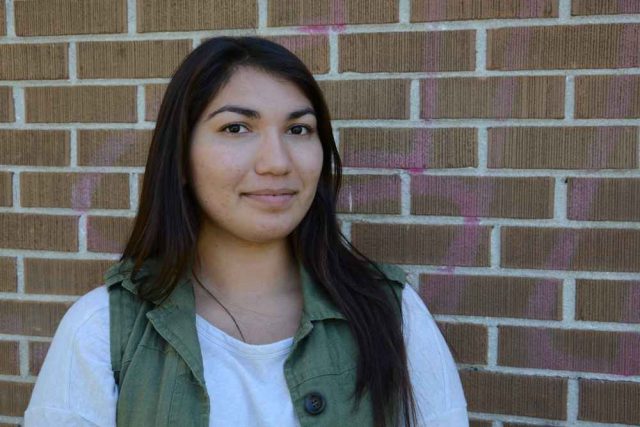 Wata’keren’á:wi Dunkley is the third woman in her family who took the initiative and learned Kanien’kéha at the KOR, as her plans for the future form, joining her passions. (Daniel J. Rowe, The Eastern Door)

Imagine sitting atop a horse, traversing the woods and describing all that is around you completely in Kanien’kéha.

It is an image that Kanien’kéha Ratiwennahní:rats Adult Immersion Program student Wata’keren’á:wi Dunkley would like to make a reality in the future, marrying her love of the natural world with her passion to learn the language.

“My goal is to open up my own summer camp,” said Dunkley, who will graduate next month. “It’s going to be all in the language, and I’m going to have them (visitors) come in, and I’ll teach them how to saddle up a horse and take them on the rides because they’ll live in the woods.”

Strolling on horseback, planting in the garden, and looking at the natural world, visitors will learn the words for the various medicines, trees, and animals in the area.

“Then bring them back into the garden and teach them how to grow their own garden,” said Dunkley. “When they leave, they’ll have this whole experience of how we used to live in the language, and have a connection with the earth and animals.”

Dunkley lives in a wooded area, and has always had a passion for farming, planting and horses.

“It’s important to know how to grow our own food, and to know what we’re actually eating instead of going to the grocery store,” she said. “That’s why I wanted to take on learning about farming and living on our own, sustainably.”

The 20-year-old graduated from Kahnawake Survival School and then entered the agricultural and equine management program at Guelph University.

Dunkley’s story of relative fluency followed by language loss is similar to many interviewed by The Eastern Door.

She was pretty fluent at a young age, but lost some of her ability to converse.

“Growing up I was more fluent because I went to Karihwanó:ron, and then in high school I kind of lost it,” she said. “Going away to college I didn’t have anyone to speak with.”

Entering Ratiwennahní:rats she found the first year comfortable as she excelled in conversing with fluent speakers, including elders.

The second year, however, with more focus on reading and writing became more difficult.

“It’s harder because it’s more complex and detailed,” she said. “It’s harder understanding what goes where… Just to put everything where it’s supposed to go, sometimes it’s hard for me to understand, but some words when I’m saying it I’ll understand, but don’t realize that there is all this grammar stuff.”

Her desire to learn the language more is easy to understand.

“I don’t want it to die out,” said Wata’keren’á:wi. “That’s one of my biggest fears: the loss of this language. I want to open maybe my own business one day, or my own school and give back to the community and our future generations.”

She has already begun learning and teaching Kanien’kéha at home.

Her mother, Sylvia Lahache, took the immersion program before and the daughter-mother team has helped each other become more confident conversing during daily tasks.

“When I’m with her planting or whatever, I tell her the words or I’ll teach her words she wouldn’t know,” said Wata’keren’á:wi. “She understands, so it’s good to speak with her.”

Sylvia’s mother, Eleanor Paul, also took the immersion program, making it three generations of women in the family who can now converse and encourage one another in Kanien’kéha.

“She’s still studying in Kanien’kéha,” said Wata’keren’á:wi of her grandmother. “We always get together on bead night. It’s mostly me talking to them, and saying all these words and teaching them.”

Her father, Mitchell Dunkley, listens and understands, and now wants to start learning the language.

Wata’keren’á:wi advises confidence and determination for those who want to become fluent Kanien’kéha speakers.

“You have to keep on with it,” she said. “Keep speaking and putting it out there, whether it’s social media or anything.”

She added to ask a lot of questions and engage with the language.

“Don’t be shy because it’s who we are,” said Wata’keren’á:wi. “Be open and willing to learn.”