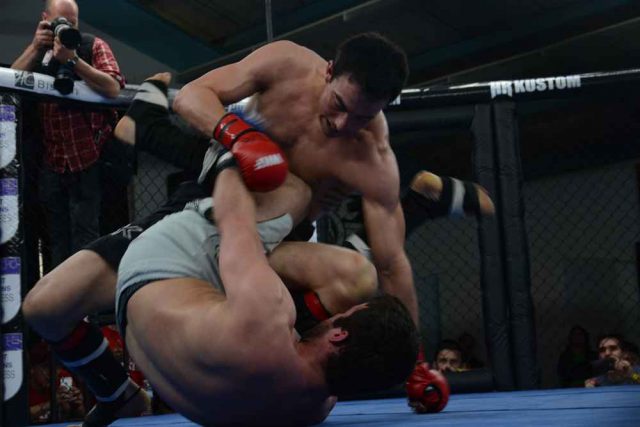 Andrew “the Canon” Antsanen was seconds away from taking Todd Elvrum in the first round on a TKO, if not for that pesky bell. Antsanen had to settle for the unanimous decision win. (Daniel J. Rowe, The Eastern Door)

On the first night where amateur mixed martial arts fighters could use knees and smaller gloves, it was good old-fashioned kicks and chokeholds that took the spotlight at Fightquest 35 at the Knights of Columbus in Kahnawake Saturday.

Both main events featured dramatic finishes with unconscious losers surrounded by paramedics in the caged octagon when they were over.

Akwesasne Featherweight Derek Hart’s arms went limp and his eyes rolled back in his head when La Prairie’s Vincent Morin choked Hart unconscious at 4:27 of the first round to take the belt.

In the Light Heavyweight main event, Lindsay, Ontario’s Justin Gimblett took a right kick to the side of the head from Zackaria “That’s It” Benbouchta Martinovic that put Gimblett square on the mat two minutes into the first round to take that belt.

The third belt of the night went to Welterweight Eric Kayolo who forced David Hubert Therrien to tap out in the first round from a rear naked choke.

Local fan favourite Andrew “the Canon” Antsanen squared off in his third Fightquest against Todd Elvrum in what should have been the fourth first round win on the night.

Antsanen took his time early in round one with Elvrum before getting on top of him and letting loose what would have been a flurry of punches and sure TKO, if not for the bell sounding.

He controlled the next two rounds and few were surprised at the unanimous decision win.

When asked what he learned on his third straight win, he said, “not to get over excited, (and) set my combos up a little nicer.”

“He trains the hardest out of everyone at the gym, and he showed it tonight with another win on him,” said McComber, who agreed that Antsanen could have taken the first round win.

“The guy was against the cage and Drew was putting the pressure on him. Too bad it couldn’t have been longer rounds or he would have finished it earlier.”

Trainer and fighter Brandon Stalk added, on the other hand, that if Antsanen does not get the TKO or tap out, things could have went very differently over the three rounds.

“Early on if you waste all your energy in the first round, then you’re burnt for the rest of the fight and it makes everything harder,” said Stalk. “You can’t do anything when you’re burnt… This isn’t a hockey fight, it’s a nine-minute fight.”

McComber feels that Antsanen could easily go pro in the near future, and that the ceiling is high for the Dene fighter.

“He trains like a UFC fighter,” said McComber. “Every day, twice a day sometimes. He’s one of the top guys in amateur right now. I don’t see anyone beating him… He could go pro easily.”

“I was hyped up and wanted to throw down with him, put on a show for everybody, but he knew I was bigger and took me down,” said Riches, who is from Chateauguay.

Riches came to Kahnawake to train when a friend told him about the Fightshop. He added that fighting in front of such enthusiastic fight fans was an added bonus.

“I train with all of them and they’re good guys,” he said. “They all push me to go harder and encourage you day in, day out.”

Saturday marked the first time Fightquest has allowed knees to the body and used lighter eight-ounce gloves instead of the heavier 10-ounce ones.

“These guys are good. Fightquest is up there with the top amateur leagues in Canada. People weren’t really sure about the small gloves and the knees, but it’s been going great all night.”