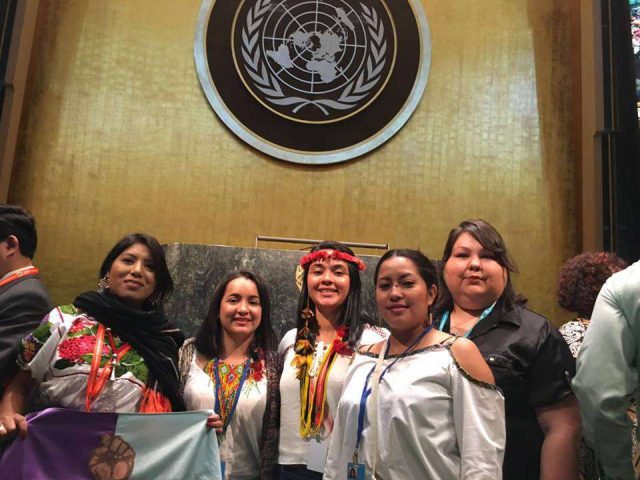 Tania Larivière, right, was one of the Indigenous youth from Quebec who attended the United Nations Permanent Forum on Indigenous Issues this week in New York City. (Courtesy Tania Larivière)

Canada announced this week that it now fully supports, “without qualification,” the United Nations Declaration on the Rights of Indigenous Peoples.

“We intend nothing less than to adopt and implement the Declaration in accordance with the Canadian Constitution,” said Indigenous Affairs minister Carolyn Bennett on Tuesday. “By adopting and implementing the Declaration, we are breathing life into Section 35 and recognizing it now as full box of rights for Indigenous peoples in Canada.”

The declaration, which was first adopted by the United Nations General Assembly on September 13, 2007, recognizes Indigenous people’s human rights. Its 46 articles outline everything from rights self-determination, language, equality, ceremonies, education and land, among many others.

Bennett’s announcement was made at the UN in New York City, where hundreds of Indigenous peoples from across the world are currently gathered to attend the 15th session of the Permanent Forum on Indigenous Issues.

Bennett and justice minister Jody Wilson-Raybould attended the opening of the forum. Both received standing ovations for their speeches.

“On the surface, it is an absolute 180-degree turn by the government of Canada on their position on the UN Declaration on the Rights of Indigenous Peoples,” said Kenneth Deer, who has been attending the two-week forum on behalf of the Mohawk Nation at Kahnawake (207 Longhouse) and the Haudenosaunee external relations committee.

“I don’t believe that this is just a rhetorical statement by Canada,” said Deer. “It really puts Canada on the record that they are going to implement the UN declaration without conditions. That’s a very, very strong statement.”

Tania Larivière, the youth representative at the Quebec Native Women (QNW) association, said she is taking the announcement with a grain of salt.

“It’s one thing to speak, but it is another thing to act,” said Larivière, who a part of a delegation from the Continental Network of Indigenous Women of the Americas that brought recommendations forward to how states can make safer spaces for young Indigenous women.

“At least the intentions are there for better recognition, it might make things a lot better. I’m just curious how that will translate into actual action,” said Larivière.

On Monday, Wilson-Raybould said one of the biggest legal questions Canada needs to unpack is how to implement the concept of free, prior and informed consent.

“Participation in real decision-making is at the heart of the Declaration’s concept of free, prior and informed consent – that Indigenous peoples must be able to participate in making decisions that affect their lives,” she said.

Bennett said Canada sees modern treaties and self-government agreements as the ultimate expression of free, prior and informed consent.

However, not every First Nation agrees.

“We as Mohawks – I don’t think we fit into those,” said Deer. “If you look at the self-government agreements, there are ceilings in there.”

Deer said Canadian policy and legislation will have to change to fully implement UNDRIP – especially when it comes to how they plan on implementing the declaration through Section 35 of the Canadian constitution.

“Canada’s position before was that Section 35 was empty of rights and we had to prove what our rights were. Canada is now taking a different position saying that box of rights is full and the UN declaration has put those rights into the box,” said Deer.

“There are going to be problems with the limits of the Canadian constitution, so we’ll battle with that at another time. When we come to that point where the constitution is restrictive, then we’ll deal with Canada then. There’s a lot of positive change. It’s a change, it’s not the status quo.”

The forum continues until May 20 with the theme of conflict, peace and resolution. Issues of youth suicide, violence against women, and the new status for Indigenous people in the UN have been discussed thus far.