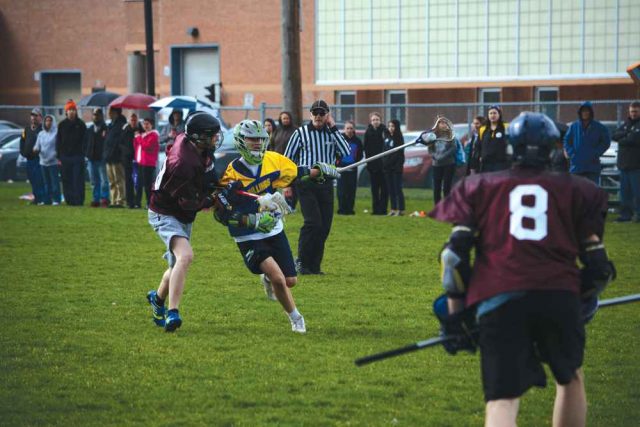 About a half dozen Kahnawake Survival School field lacrosse players stood on the sideline Monday watching Howard S. Billings’ first field lacrosse game of the season against Beaconsfield High School, sizing up the competition as May 18 looms.

The four-time champions had little trouble dispatching the plucky west island side, winning 13-2, but Billings knows it will need to bring its A-game if it hopes to make it five banners in a row.

“It will be tougher than all the other years that I have played,” said Billings forward Tyson Two-Axe, who scored four goals Monday. “It all depends on who wants it more.”

Two-Axe added that although Billings lost the imposing presence of no. 24 Cam Horn, his absence has given the opportunity for younger players to come into their own.

“We have a good team with a lot of small kids who are trying to win another championship along with the other veterans,” said Two-Axe.

One such player was no. 7 Koleton Marquis, who, in spite of his size, made a statement in his first game with Billings, assisting on four and scoring one.

Another player who showed his ability to run the offence and step up in the absence of some of last year’s players was Stone Jacobs who directed the Billings’ offence, and will be counted on against the tougher teams in the GMAA.

Jacobs said the season will be different, but other teams would be wise not to underestimate his squad.

“Without Cam it’s a lot different, (but) we do have the depth, and a strong first line,” he said.

Billings’ runners know that Survival will be coming for them and is ready to take the challenge on by doing simple things to control the game.

“Shut KSS’s top players down and score goals,” said Jacobs with a smile.

What did the Survival boys think of Billings opening game?

“Scrap,” joke KSS attack Jake Rice Jr. adding in a more conciliatory tone, “they have a good team, but it should be a good game between us.”

Kuper Academy is the dark horse contender every year, and won in its first game against Beaconsfield 6-0.

For Billings, this season will be about proving it is still the dynasty it was regardless of who graduated last year.

“We’re the defending champs so we will have to show them what we can do without those graduates,” said Two-Axe.