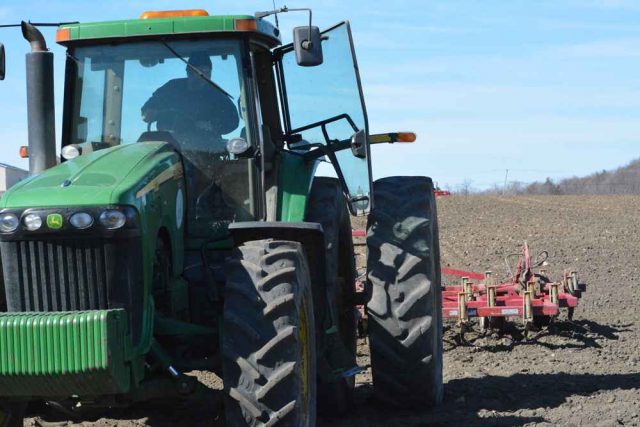 A plot of land sitting in the middle of Kanesatake caused ripples of dissent through the community concerned about the trees being cut. (Daniel J. Rowe, The Eastern Door)

Pascal Lecault, co-president of Les Jardins Vegibec, bought a piece of land from Kanesatake’s Charles Lamouche in February of last year to grow produce for the business he owns with his brother.

When he allowed a friend from St. Joseph, who was hard up on his luck and needing money, to cut some trees down to sell on the land, he learned that the land in question came with some baggage, as it was a non-Native square within the territory of Kanesatake.

The plot is in between two Kanesatake residents’ land along Highway 344, and the site of non-residents cutting down trees on the mountain sparked heated words and anger among some residents in Kanesatake.

“If I had known it would cause a scandal, I never would have done it,” said Lecault.

The trees in question were mainly poplar and birch trees that grow quickly, and the larger maple trees were not cut.

Word got to the Mohawk Council of Kanesatake and council grand chief Serge “Otsi” Simon sat down with Lecault last Thursday to explain the history of the land in question. Lecault now understands the situation and has not cut or grown anything more on the land.

“He was not aware of all of the issues that surrounded the land and the potential hazards that he faces as a land owner in the heart of our territory,” said Simon. “I cleared that up with him, and he was a little bit taken aback with the whole land issue and the history behind it.”

Lamouche, whose mother is Mohawk and who inherited the property from his non-Native father, and tried to sell the land to the government after 1990, but said the government told him, “don’t worry. You can sell it to anyone,” he told The Eastern Door.

Simon has tried to reacquire the land for Kanesatake under a land claim and through talks with Aboriginal Affairs without success.

“That never went anywhere,” said Simon. “They said, ‘no, no, no. Once you get your compensation money from the land claim you’re under, you can purchase it back.’ My stand has always been, I’m not buying land that already belongs to me, so if you want to compensate me for loss of use, that’s fine.

“Just maybe, we would consider compensating the non-Native for the improvements he made on the land and then send him on his way, but I’m never going to admit that the land doesn’t belong to us.”

Simon and Lecault’s meeting was amicable, and his willingness to work with the MCK may help the next time Simon speaks with the government about signing over the land officially to Kanesatake.

“I did ask Mr. Lecault, ‘if the time comes, would you be willing to accept any kind of compensation if I can work something out with the federal government to compensate you for your investment?’ He said, ‘absolutely,’” said Simon.

Lecault went further and asked Simon if, once the ownership is cleared up, would council be willing to rent the property to Vegibec?

“I said it depends on the terms,” said Simon.

Vegibec rents land from another Mohawk in Kanesatake, and Simon said it might be a good way to put money in the coffers of the cash-strapped community.

“It’s the community that has to consider this, not us,” said Simon. “We make the proposal, and the community agrees or disagrees. There could be the potential to bring in close to $100,000 a year in revenues that could go to language and culture, education, (or) elders issues.”

A road running along the side of the land into the mountain will remain free for residents to use, according to Lecault and Simon.

Lecault said he does not want to cause any stress of discontent in the community, and hopes the situation can remain peaceful.

“I hope so,” said Lecault, who was prepared to apologize to the community for causing the disturbance and allowing the tree cutting.

“We could make something very positive out of something that’s very contentious,” said Simon. “It depends on how willing the community is, to do something like that.”