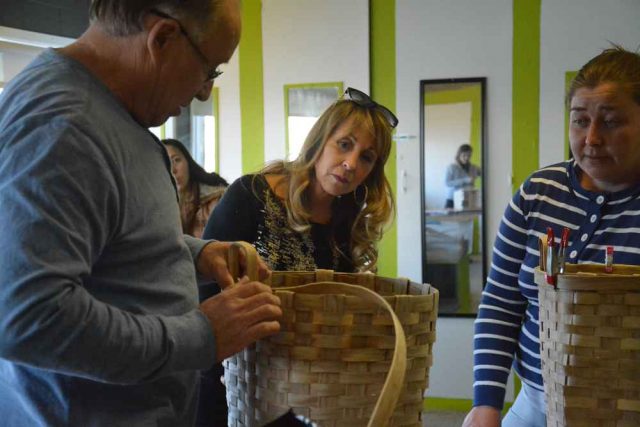 Basketry was just one of the themed workshops offered by the Kahnawake Youth Center for Cultural Awareness Month. (Jessica Deer, The Eastern Door)

For the past month, four Kahnawa’kehró:non have been working hard to make their own traditional baskets woven from black ash splints.

“I love doing crafts and I never made a basket and figured I’d try it out because they’re so beautiful – and I know a lot of work goes into them,” said participant Brooke Splicer.

The basket-making workshop is just one of the activities organized by the Kahnawake Youth Center (KYC) for the Kanien’kehá:ka Onkwawén:na Raotitióhkwa Language and Cultural Center’s fifth annual Cultural Awareness Month.

Throughout the weekly class, Splicer and another participant worked on weaving corn-washing baskets, while the other two finished up their pack baskets with the help of instructor Richard Nolan.

Stephanie Horne plans on using her newly made pack basket to collect fruits and vegetables from her family’s garden this summer.

“I thought it was a wonderful opportunity to learn something that I believe is very important and a part of our local culture as Mohawk people,” said Horne.

Nolan has been passing on his craft to others since 2012.

“I finally made a basket, looked at it and seen beauty in it and knew I wanted to show people how to make it,” said Nolan. “It took me two to three months, but I approached Kateri School – that’s where I started, from there I came to the Youth Center and it just kept going from there.”

For Horne, the experience helped her learn firsthand the time it takes to perfect the craft.

“I never realized how much work went into making baskets,” she said. “I have a much greater appreciation now for those that do take this on because it’s hours and hours of labor.”

The group did dedicate over 36 hours to their baskets thus far. At the beginning of the month, they started off by cleaning the black ash splints, cut them into ribbons, and began weaving them.

“It’s not a lot of steps, but the steps take a long time for each one,” said Splicer.

She said cleaning the splints was a challenging task.

“That was the hardest part but it’s very rewarding seeing it all come together,” said Splicer.

The group’s last class is on Tuesday.

“One of the things that is unique is all of our baskets have their own creative edge. We started with the same material, but the end product is something that is very unique to the creator,” said Horne.