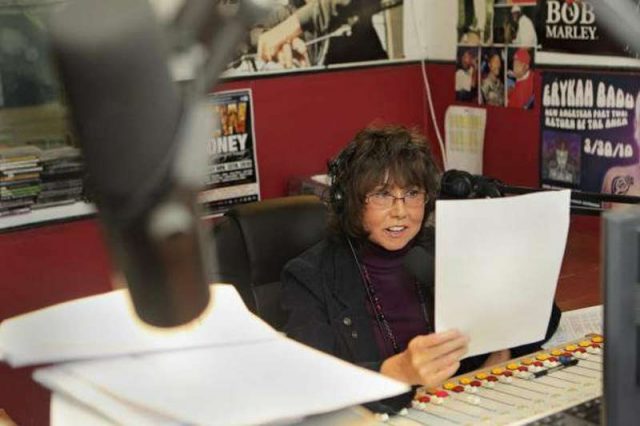 Kahnawake said goodbye to one of the community’s most hardworking women last week.

Lori Niioé:ren Jacobs passed away last Thursday at the age of 60 due to complications of Scleroderma.

“She was strong. She didn’t let it show how sick she really was,” her daughter Falen Jacobs told The Eastern Door.

The single mother of two was diagnosed with Scleroderma, an autoimmune disease that causes chronic hardening and contraction of the skin and connective tissue, over 30 years ago.

“We believe she had it all her life. She was diagnosed not too long after I was born and they gave her a very short period to live at the time,” said Jacobs.

Lori defied those odds and lived three decades beyond what her doctors predicted, contributing to a lifetime devoted to local journalism, communications, politics, and volunteerism.

“Everybody knew that she was a strong person,” said her son Aaron Delaronde.

“She worked so many jobs. When we were a bit older, she went back to school – she was a really good role model. I aspired to be like her,” said Jacobs.

Lori attained a journalism degree from Concordia University and was a familiar face and voice in local media. K103 station manager Cheryl Deer described as being a staple at the local radio station.

“She was here from the beginning. At one point she was a station manager, she worked with Conway (Jocks), you could always count on Lori to take part in what was going on in the station. She loved the station,” said Deer.

In 2009, she began filling in as host on the noon-hour Partyline Talkshow for Don Patrick Martin and by 2010 took over the position. She even remained on as host when she enrolled in the Kanien’kéha Ratiwennahní:rats Adult Immersion Program in 2012, and was still producing the show up until the day she passed away.

“It’s a big loss to K103. She took pride in her work and she took pride in the organization. It is going to be very difficult to fill her shoes,” said Deer. “Emotions are still very raw right now. We’re very saddened. We already have to do our first event on Saturday without her and it doesn’t feel right.”

Her loss will also be felt throughout several community organizations.

“There’s no doubt that her loss hit us hard all over the place, but especially at the MCK. She was very familiar to many different departments,” said Mohawk Council’s press attaché Joe Delaronde.

During her career, she was part of council’s communications team, helped produce the Kahnawake Revisited series, worked on the Seigneury of Sault St. Louis file, among many other projects.

“She was very much involved,” he said. “We’re very familiar with her work ethic. If she had a project, it was going to be done. That’s what we liked about Lori. That’s one thing we were always impressed with.”

Lori was also a long-time member of the Kateri Memorial Hospital Centre’s board of directors. She was also their first communications officer and created the “KMHC Pulse” video segment for local television.

“We’re really going to miss her,” said Delaronde. “It’s a big hole to fill. I don’t know how many people it is going to take to fill all the different roles that she had. She was always involved.”