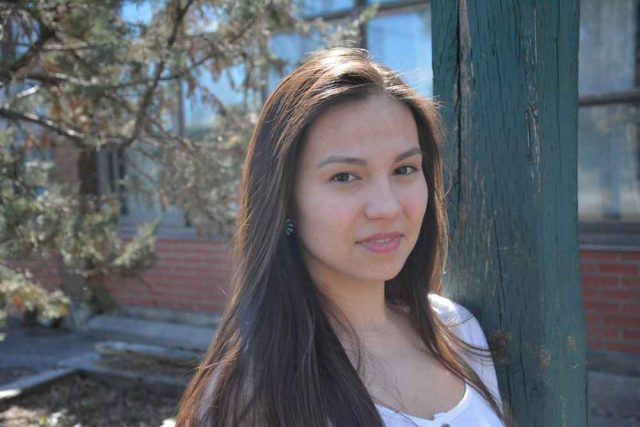 Hearing Kanien’kéha every day caused nothing but joy for Karennenhá:wi Goodleaf, who started two years ago down a path to fluency dotted with lessons of culture and tradition. (Daniel J. Rowe, The Eastern Door)

In under two months, the journey will end for the students, who sat down two years ago and began lessons in the Kanien’kéha Ratiwennahní:rats Adult Immersion Program at the Kanienkehá:ka Onkwawén:na Raotitióhkwa Language and Cultural Center.

Karennenhá:wi Goodleaf, 21, far from being nervous or stressed in the first weeks in the program, was excited to hear her language every day.

“I was always so happy and so excited with all the new words I was learning,” she said.

Almost two years later, Goodleaf leaves the program with a solid grasp of her language that she ties directly to her identity as a young Kanienkehá:ka woman.

Her decision to apply for the Ratiwennahní:rats program came after a simple realization in a mixed-level Kanien’kéha class in high school.

“We were sitting at a table, there were four of us, and we were talking, and one of my friends, who was in the high class with me, she meant to say something in the language, but she said ‘potato’ instead,” said Goodleaf. “We were all laughing and the kid that was in the low class was just staring at us like, ‘I wish I could be laughing with you because I don’t know what you said.’”

No thunder crashed or lightning flashed, but not knowing ohnennà:ta left an impression.

“It broke my heart,” said Goodleaf. “It made me so sad. I wish he could laugh with us because he is our friend.”

Her father, John Goodleaf, also wanted his children to be more fluent than himself, and Karennenhá:wi wanted to gain fluency in the language she could pass down in the future.

“I’ve had past teachers who would only speak Kanien’kéha to their kids, and that’s what I wanted for my future children to learn to speak because I feel like that’s where it should start,” said Karennenhá:wi. “It shouldn’t start at a school. It should start with your mother because that’s how it comes most natural.”

It is no shock to learn the Iakwahwatsiratátie Language Nest left a big impression on Karennenhá:wi, who said she would like to continue working or volunteering at the organization.

Goodleaf has been in immersion settings before studying at Karihwanoron Mohawk Immersion School as a little girl, before transferring to Karonhianónhnha Tsi Ionteriwaienstáhkhwa, and then Kahnawake Survival School.

Her father’s decision to send his children to an immersion school left Karennenhá:wi with a solid base that she was able to build on in the immersion program.

“I’m so grateful for that because I feel like if I didn’t go to Karihwanoron as a kid, I would have struggled in the second year,” she said.

Karennenhá:wi will have company at family dinners speaking the language, as her younger brother Skahtehrí:io Goodleaf will graduate beside her in June.

The 21-year-old said for the language to stick, a program like Ratiwennahní:rats is essential. Classes are good, but immersion is essential to gain proper fluency.

“I learned a lot of medicines and such, but you don’t learn anything in an hour,” she said. “You have to be in a fluent environment to learn something, like an immersion situation.”

Karennenhá:wi intends to continue studying, and perhaps work as a teacher in the future.

“I don’t want it just for myself because I feel like you’re supposed to share it with everybody,” said Karennenhá:wi. “I don’t want to just keep it in my family. I want to be able to help others.”

One thing she also intends on continuing is visiting elders, as students in the program have done over the two years.

“I found that helped me a lot because in the classroom, you learn certain words, but when you go visit elders, you learn the old language,” she said

“Old words that people don’t use anymore, and I feel that that’s important because they’re getting old. Every time an elder dies, their wisdom and their words, everything that they knew dies with them, so I feel it’s important to get to know them.”