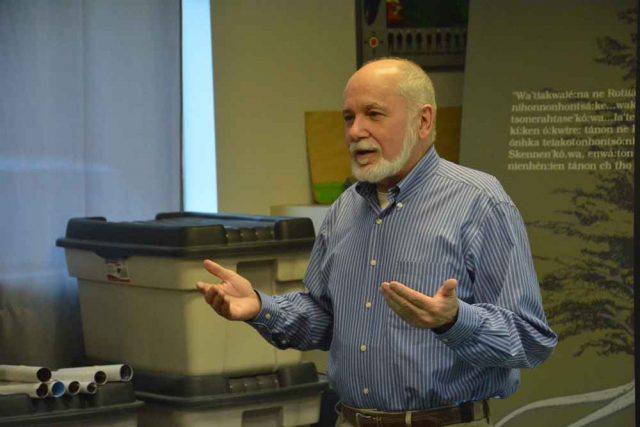 John Masiewicz’s passion for charting family trees, and tracing genealogy led the electrical engineer to Gervase Macomber and a history of one of Kahnawake’s biggest families. (Daniel J. Rowe, The Eastern Door)

They are questions electrical engineer John Masiewicz from San Jose, California tried to answer when charting the history of his wife Georgia Louise Peters, who is the fourth great-granddaughter of the patriarch Gervase Macomber.

Masiewicz was at the Kanien’kehá:ka Onkwawén:na Raotitióhkwa Language and Cultural Center (KOR) Wednesday night to discuss his book [Gervase Macomber and His 26 Children in Kahnawake (Caughnawaga)], and the research methods he used to chart the McComber family in the 19th and early 20th century.

The first part of his presentation focused on useful tools to chart lineage available online, and the hiccups he had traveling through the leaves of his wife’s family tree.

He also spoke about the need to look at facts objectively when charting a family history.

Masiewicz quoted second United States president John Adams who said, “Facts are stubborn things; and whatever may be our wishes, our inclinations, or the dictates of our passion, they cannot alter the state of facts and evidence.”

With membership and lineage at times contentious and sensitive, those looking at their family’s past need to be ready to accept facts as the Adams quote demonstrates.

Peters, whose family was being charted, knew this going in and fully embraced the process.

Masiewicz explained how church records are incredibly useful for Kahnawa’kehró:non looking to chart their families, as some of the attendees noted, who have started their own family trees.

The second part of the talk focused on Gervais Macomber (spelled many ways, including Jarvis), his three wives and 26 children.

Macomber’s Mohawk wife, Charlotte, and two subsequent non-Native wives, and their children, all lived in Kahnawake (Caughnawaga at the time), and caused a series of controversies and draw a fascinating picture of the community at the time.

It’s not a stretch to say the audience became particularly attentive and even animated when Masiewicz spoke about attempts to evict Macomber along with all other whites in 1823 and 1835, and Macomber’s successful defence of his place in the community.

“He did it by the book,” said Masiewicz of Macomber’s defence in court of his right to live with his family. “He may have been crafty, but there doesn’t seem to by any deceit that I have found.”

Masiewicz said that Macomber, a translator, who likely spoke three languages fluently, never denied who he was. Many of his children married Kahnawa’kehró:non, and very few of them left the community.

Masiewicz has found 97 grandchildren of Gervase Macomber, and he is certain there are more.

“I know I haven’t found them all yet,” he said. “Since I wrote that, I’ve found more, and I know those numbers will go up… I would like to have all of Jarvis’ children documented, and all of his grandchildren documented with as many of the names below that as I can. I’d like to get those three generations nailed. I’m pretty close, but not completely there.”

Audience members piped up at the end of the talk about their own families, and excitement at tracing their lineage. Alex McComber mentioned his discovery of Gervase’s Kanien’kéha name, and Charleen Schurman mentioned that she has found her daughter’s Mohawk name while searching through the roots of her family tree.

Genealogy can be an exhaustive process, and it was no different for Masiewicz, who would progress slowly at times before releasing a flood of information.

“He was amazed that he was able to keep going and get bits of information, and then it would settle down, nothing would come across as new, and then one teeny bit of information would come up and start him on a new track,” said Peters.

Masiewicz is open and honest about mistakes in his research and encourages those who find an error to contact him, so he can correct it. He makes no profit on his book, and posts all his findings and research methods online.

More information on the book can be found on its Facebook page, and the author can be contacted at 26Macombers@gmail.com.