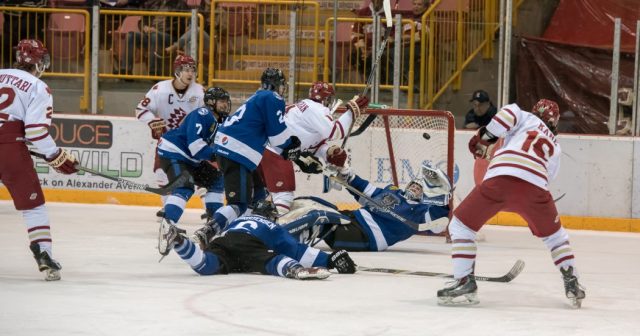 Kale Kane is back and firing for the Chilliwack Chiefs after missing a game with whiplash. His team goes into the final round tonight. (Courtesy Darren Francis)

The first game loss of the semi finals in the British Columbia Hockey League (BCHL) playoffs proved a hiccup for the Chilliwack Chiefs, who caught fire at the right time, and won back-to-back games to book a date in the Fred Page Cup Finals that start Friday.

Chiefs forward Kale Kane was back on the ice Sunday when Coquitlam needed a win to advance at home against the West Kelowna Warriors.

“I got hit from behind in the second period of the Nanaimo (Clippers) game (April 4) then sat out the next game in West Kelowna (April 6),” said Kane. “I’m feeling a lot better now.”

Kane picked up three assists Sunday, as the Chiefs came from behind to beat the regular season’s number one team West Kelowna 4-3 in front of a loud and proud home crowd.

“They scored two quick goals to put them up early in the first, but we were out-playing them, so we knew the game would change if we scored on the next one,” said Kane.

The Chiefs’ hard work was rewarded midway through the second period when Kane fed the puck to Jeremy Germain, who found Kohen Olischefski, who buried Coquitlam’s first goal.

“From there on, we played our game and capitalized on our scoring chances,” said Kane.

Coquitlam’s Ryan Bechtel scored 4:16 into the third to tie the game, then Kane found Germain, who potted one to take the lead for the Chiefs.

Kane assisted on the fourth goal to give Coquitlam the two-goal lead before West Kelowna got one back.

The Chiefs will now play West Kelowna in the final round, which beat Nanaimo 3-2 Tuesday night.

The third round of the playoffs were round robin style with the first two teams to three wins advancing to the final.

After the Chiefs’ initial loss to West Kelowna, Chilliwack beat Nanaimo 4-1. Then Nanaimo beat Chilliwack 3-2, and each team had one win apiece.

The Chiefs found a groove in the final two games, and booked the first spot in the finals, and get home-ice.

“We knew even with those losses, we could still potentially have a chance at moving forward,” said Kane. “I think we just came together as a team and everyone picked up their game that much more.”