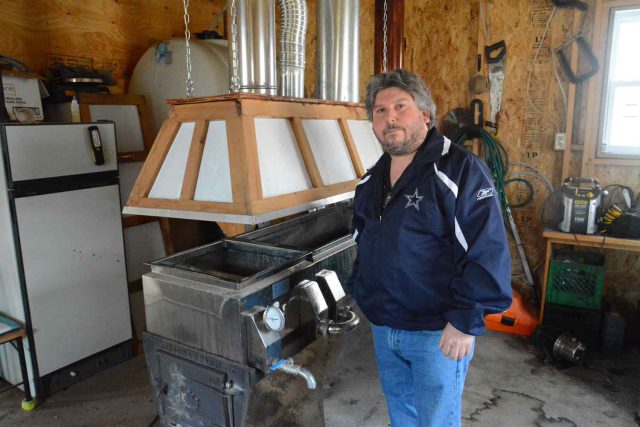 Frank ‘Putsky’ Rice has been tapping trees on his daughter’s property for the past four years. (Jessica Deer, The Eastern Door)

With the maple season coming to a close, several Kahnawa’kehró:non are reaping the fruits of their labour.

Frank ‘Putsky’ Rice turned his backyard hobby of producing sweet treats into a successful seasonal business that many community members anticipate each spring.

Toward the end of February, he takes his vacation days from his job at the Sports and Recreation Unit to spend his afternoons tapping trees, collecting sap, and producing maple syrup to sell at local convenience stores.

“This is our third full season with this machine and if all goes well, I’m looking at upgrading to the next bigger machine then that,” said Rice, pointing to an evaporator he has in a 16-by-16 foot building on his daughter’s property.

This year, Rice and his brother-in-law Tommy McComber tapped 225 trees when the snow started to melt. The weather has to be just right and warm enough for the sap to run.

He said the first draw off takes about eight hours boiling before he gets a gallon of syrup, then another gallon every two hours.

“The season doesn’t last long at all,” said Rice, noting that he might be able to collect one more round of sap before the end of the season.

During the fall, Rice received a business loan from Tewatohnhi’saktha to expand his building that houses the evaporator and filter press.

The new addition now has enough room for the two to comfortably bottle the syrup and make maple candies.

“Once I pass it through that filter press, then we still have to put it in the finishing pan with the spout, then we have to put it back on the stove to make sure that it’s at about 200 degrees to bottle. You got to bottle when it’s hot,” said Rice.

For Charlie Patton, the process of making maple syrup is a lot simpler.

“With me – you just dip your spoon in, look at it, and when the last drip hangs then you know it’s syrup, thick enough and then you can probably boil it a little bit longer,” said Patton.

He doesn’t use any “fancy” equipment to carry out his production.

“I’m still very backwoods at it,” he said. “I found some old woodstoves that were discarded and rigged up my own system. With one, I used a torch and burned the top out of the stove and made my own sap boiling system with chafing dishes on top.”

Each chafing dish holds about 18 litres of sap, he said, and it takes about 50 litres of sap to make one litre of syrup.

The local elder began tapping a few trees on his property as a new hobby when he was close to retirement.

“My purpose in doing that is so that I can show my kids and grandkids that syrup doesn’t come out of a can. There’s a process where you tap the trees, there’s the work of carrying it out, boiling of the syrup and actually learning how to make syrup,” said Patton.

This year, he tapped about 50 trees to produce enough maple syrup for his family, donate to local schools and the Mohawk Trail Longhouse.

The activity is also connected to traditional Kanien’kehá:ka wáhta ceremonies.

“We go to ceremonies and give thanks for maple. We encourage the maple to come back to life and all of that in our ceremonies, and then I don’t see many people going out and actually doing it,” said Patton.

At the Mohawk Trail Longhouse, two ceremonies are conducted, with the first one taking place just after mid-winter.

“We put sap in the trees. It’s an expression, what we do is burn tobacco and we encourage the trees to come back to life,” he said. “Then, when we have enough sap, we gather and give thanks.”

“For the month of April, Kahnawà:ke Tourism is inviting businesses to incorporate maple-themed products into their offering, whether it be gastronomical goods; specials, treats, meals made with syrup, sap tea; or items for sale such as art, souvenirs; the ideas are endless!” Kahnawà:ke Tourism’s Kimberly Cross-Zacharie emailed The Eastern Door, which prompted the above article.

“Our idea is to help promote the specials for the month of April on our website, social media and various media outlets within the community,” she said.