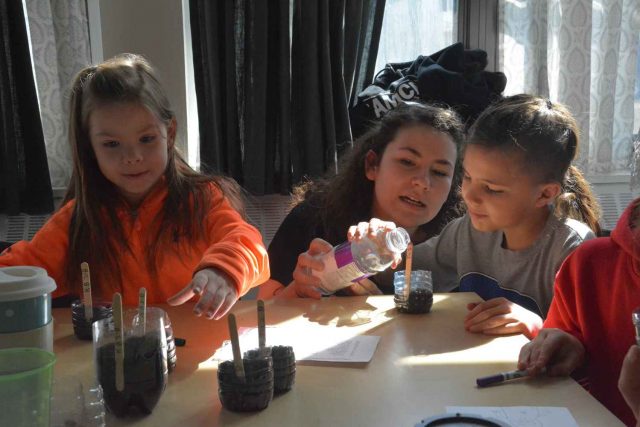 Corn, bean and squash seeds found their way to soil courtesy of Ratiwennahní:rats Kanien’kéha Immersion students, who were helped by their younger gardeners. (Daniel J. Rowe, The Eastern Door)

From the Creation Story to the three sisters to BINGO to a live Tóta tánon Ohkwári show, Kids Day had all bases covered at the Kanienkehá:ka Onkwawén:na Raotitióhkwa Language and Cultural Center (KOR) Monday.

The cultural centre’s halls and rooms were buzzing all day with six classes of elementary students from Indian Way, Karihwanoron Mohawk Immersion, and Karonhianónhnha School in four rooms’ worth of activities stressing language and culture.

Ienonhsaka’én:ions Trina Stacey had a crew of around 20 students wrapped and attentive as she gave an animated reading of the Creation Story in Kanien’kéha with English explanations.

“I’m happy that I heard it because I didn’t know the whole first part,” said grade five Indian Way student Bonnie Zachary. “I found out a whole bunch of new things that I didn’t know before.”

“I had a little trouble, but I’m pretty good at understanding it,” she said.

Otsistohkwathe Beauvais, 10, was active throughout the presentation asking questions to get as full an understanding of the story as he could get. He said the way Stacey and helper Teyowí:sonte Tommy Deer performed the story was extra helpful.

“Because it has pictures and stuff it’s a lot easier to notice, and I can ask a lot of questions,” said Otsistohkwathe Beauvais, 10.

Young and old students in the classroom next door had their hands in dirt planting and learning language.

“I planted corn, beans and squash and then I watered it, so we can eat it when it’s done growing,” said eight-year-old Shako’nikonhrawis Diabo from Karonhianónhnha School.

Diabo explained why it was important to plant the three sisters to The Eastern Door.

“It’s part of the Ohén:ton Karihwatéhkwen, and the Creator made them to be special,” he said.

The planting session was delivered in Kanien’kéha, giving the younger students a chance to speak with the older immersion students.

Diabo said he had trouble at first, but was able to speak after a bit of practice.

“It was hard because I was nervous,” he said.

“They enjoyed it,” said Indian Way teacher Malory Rice. “They thought it was very funny.”

Seeing the puppet show live, adds an extra level of enjoyment for students used to seeing the show on television.

“They were very nosey,” said Rice. “They were trying to see how it works and look behind the screen.”

The final room was loud and full of excitement as kids played BINGO and the peach pit game with the remainder of the KOR staff.