The greatest part of this job is listening to stories. There have been numerous times where I have sat across from a person and thought, ‘thank goodness I’m writing this down, so everyone who wants to can read their story.’

Sometimes, the stories provide life lessons, sometimes controversy, sometimes joy and sometimes inspiration, and some of the best by far are stories from elders.

The process of journalism, in part, is taking an oral history from a subject, and putting it in writing, thus combining two styles of history with the goal, among other things, of preserving and sharing stories.

Chief Irving Powless Jr. of the beaver clan of the Onondaga Nation is full of stories, lessons and straight up charm. His mind is vibrant and active, and the interesting tales from throughout his life and beyond have been put together in Who Are These People Anyway (Syracuse University Press, $45 USD (cloth), $19.95 USD (paper).

Edited by Lesley Forrester, Powless’s oral histories are recorded and transcribed and travel through a range of topics from politics to sports to stereotypes to criticism of the United States’ history of broken treaties.

The oral history style of the book makes it conversational and engaging in a way an autobiography sometimes fails to do. Forrester sticks strictly to what Powless says, even when the conversation veers off on a tangent. In fact, the tangents are often the most interesting parts of the short chapters.

“They bump hips” is a chapter on lacrosse. 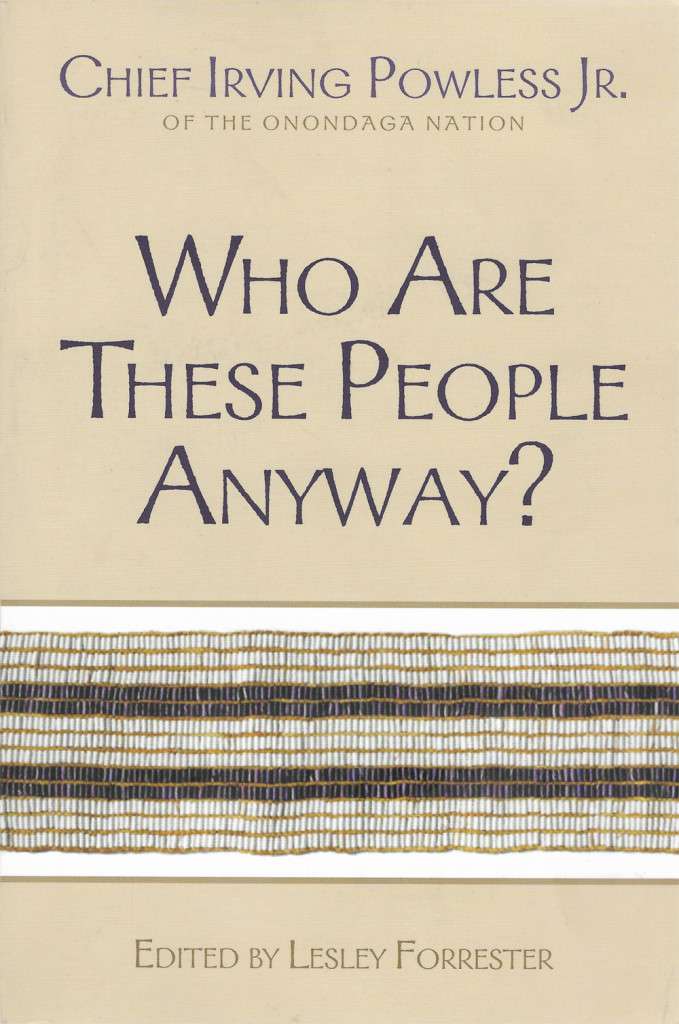 “So anyway, at the age of five I received my first stick,” Powless says. “At the age of nine I received my second stick, which was made out of white ash. And I have played in the old way, in a field with two sticks stuck in the ground as the goal. And I wore no pads. The stick that I got in 1939 lasted me until 1949. Ten years, I played with it.”

The chapter continues by telling of Powless stepping into the box with none other than hall-of-fame Cleveland Brown running back Jim Brown.

“As he started downfield, I was the only one standing between him and the goal,” Powless recalls. “And he took one look at me and he said to himself, Well, I’ll go right by this guy. So he came pounding by at top speed, at 235 pounds. And as he went by me, I bumped his hip. And down he went: it was the first time he had ever been knocked down in a lacrosse game, any lacrosse game. He played high school, he played college, and he’d never been knocked down. He was in our box lacrosse game 30 seconds and he was lying on his back. I guess he found it unbelievable.”

It’s a charming story, and also gives a glimpse of where the history falls a little short, and should be taken for what it is. Jim Brown played football, and definitely was knocked down one or two times.

It is very cool, however, to think of him getting rattled by a much smaller lacrosse player, and one only wishes there was video of the hit.

Powless is unapologetic and very critical of non-Native lifestyle and culture. He says in the chapter “What a sad situation in the white man’s world!” white people don’t dance with their children, as opposed to Onondaga families.

“So how sad in the white man’s world that this doesn’t usually happen between parents and their children; they don’t dance together,” he says. “But in our society it happens all the time. We have a dance: everybody dances.”

Anyone who’s attended an Italian wedding may beg to differ with Powless, but the point is taken for what it is.

Powless’s detailed accounts of the various treaties signed between the Haudenosaunee and Dutch, British and American governments are very useful and interesting. He comes back to them time and time again, and provides a very important discussion for Native and non-Native readers to understand their importance.

“And if you look at the constitutions” Powless says,” how it’s written, you’ll also find that you come to the same conclusion, that the Supreme Court does not have the right or the authority to change a provision of a treaty, an international treaty.”

Powless has lectured throughout his life on treaties at universities and colleges throughout Turtle Island and his pointed criticism of how the US has reneged on treaty obligations throughout its history is well worth reading about.

His discussions of treaties, politics and sports always tie back to nature, and the traditional Haudenosaunee way of life. It is these moments that are most enjoyable, as he talks about lessons his father, grandfather, and other family members taught him, and the importance of balance and respect for nature.

“If we don’t take care of Mother Earth and the things that are here, we are not going to survive,” says Powless. “When the Creator made Mother Earth, he put down things that we would enjoy and that would help us sustain life. And everything has a purpose, no matter what it is – mostly to be part of a food chain.”

It’s always a joy to listen to stories from an elder’s perspective. Their vision leads listeners/readers to a past we at times neglect to remember was there. Looking back helps explain how we got to where we are, and Powless is an ideal guide for this journey.