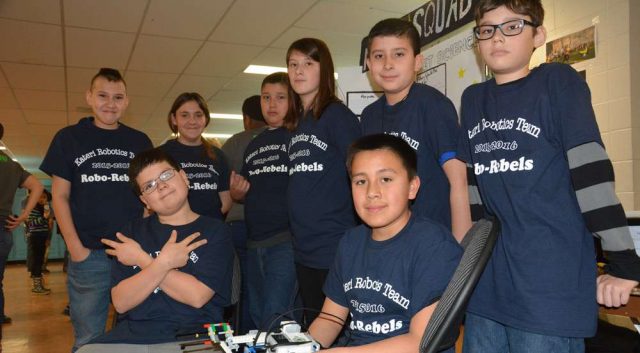 While most Kahnawa’kehró:non were dipping their toes in the sand on spring break, eight elementary students spent their vacation putting their science and engineering skills to the test.The Meka Squad, composed of eight grade five and six students from Karonhianónhnha Tsi Ionteriwaienstáhkhwa and Kateri School, competed in their first robotics competition last Friday at Georges Vanier high school in Montreal.

This year’s theme, The Trash Trek Challenge, asked teams to explore and invent a solution to the world’s trash problem using a Lego Mindstorm robot to complete trash-themed missions on a playing field.

The students’ project focused on the possibility of reducing the amount of trash in landfills by using rocket ships to launch it into space.

“In ways, you can put trash on another planet, but you can’t in other ways because the rocket shoots out so much carbon dioxide. It makes so much of it and that’s the worst kind of polluting… plus, you won’t be able to fit so much trash inside the rocket,” explained grade six student Tahaweraratie Lazore.

During the morning, a panel of judges evaluated the Meka Squad on their science project, teamwork and robot design, while the robot’s performance was put to the test with a number of missions during the afternoon.

“It’s been challenging,” said Rotshennón:ni Two-Axe on Friday. “There’s a few missions – different tasks related to trash, project demolitions, salvage, composting, cleanup. We only did a bit because the programming took time.”

The rookie team ranked seventh out of the 23 schools that participated in the competition, which was a regional qualifying event for the international FIRST Lego League (FLL).

“What they did with the little time they had was quite impressive,” said Charles Armstrong, a mentor for the group through Youth Fusion. “The robot judge seemed impressed. They noted unique things about their robot that they haven’t seen before – It’s bulkier than most of the robots we have here. The point of that is to get guidance from the walls and it is easier to hook stuff on it.”

Although the Meka Squad did not qualify to complete at the Quebec finals, the students enjoyed the experience.

“The fact is that I like Lego and the robot is made out of Lego,” said Lazore. “It was a fairly good experience. I enjoyed it and had lots of fun.”

The competition organizer was also impressed by the team’s performance.

“They did very well on the mat for a rookie team,” said Rachid Abiza, director of the FLL program for Robotique FIRST Quebec. “They had a lot of seasoned teams that were qualifying. I saw how they behaved, stuck together as a team. I can tell that they are very promising for a young team at their first participation.”

The team prepared for the competition by meeting every day during their lunch hour and after school once a week for the past few months, including a few sessions over their spring break.

“I think it is a lot of credit that they’re spending their March break doing science. They’re definitely dedicated,” said Acacia Prophet, a grade five/six teacher at Kateri that accompanied the students to the competition.

This is the first year the elementary schools have been involved in robotics as a part of a pilot project through the Kahnawake Education Centre to spark students’ interest in science and technology.

Since September, Armstrong has been visiting classrooms at both schools twice a week for 45-minute session to teach students how to build, test, and program the autonomous robots.

“Lego is very contagious fun, that is what is fun about this program. We learn by having fun. We don’t even realize that we’re learning math, technology and science. But by doing the project along the way we learn to work in groups – It’s really by doing hands on,” said Abiza.