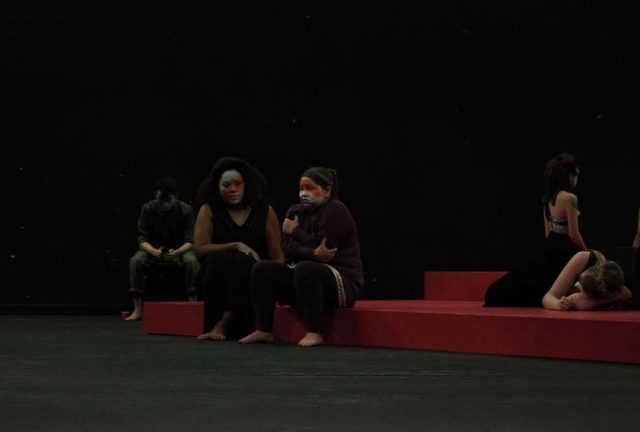 By: Zachary Kamel, The Eastern Door

“Mighty and of high renown, among mortals and in heaven alike, I am called the goddess Aphrodite. Of all those who dwell between the Euxine Sea and the Pillars of Atlas and look on the light of the sun, I honor those who reverence my power, but I lay low all those who think proud thoughts against me. For in the gods as well one finds this trait: they enjoy receiving honor from mortals.” – Aphrodite in Hippolytos.

A stepmother falls in love with her virgin, chaste stepson. Rather than inform her stepson of her love for him, she decides to starve herself to death. Her caretaker decides that this isn’t her fate and intervenes, informing her stepson of his stepmother’s unnatural love and longing.The stepson becomes enraged and says he will never betray his chastity. When news returns to the stepmother that her secret is out, she decides to hang herself, but not before writing a note to her husband, falsely accusing her step-son of rape in order to protect her secret.

The note causes her husband to curse his son to death and banish him from the home. On his way out of town, the son decides that he’d rather die than leave, and drives his chariot full speed into a bunch of jagged rocks. The father eventually finds out the truth, that his son was innocent, and is left a broken man.

Sounds like the makings of a 1980’s primetime soap opera. Now, throw in the spiteful goddess of love, Athena, and the goddess of the hunt, Artemis, and you have Euripides’ Hippolytos.

The main difference between soap and Greek tragedy… soap operas come and go, they are quickly forgotten and rarely emulated and repeated. But the Greek tragedies are timeless, being performed thousands of years after they were written by acting troupes across the globe.

One of the most recent incarnations of this tragedy is Stephane Zorav’s Hippolytos, and Alkestis, both of which premiered at Dawson College’s Professional Theatre on Wednesday night with Kahnawa’kehró:non Wahsonti:io Kirby cast in multiple roles.

“The plays seem archaic and out of touch with everything, but they are actually very similar to different plights that we have now, it’s the human story,” said Kirby.

The first thing that the viewer will notice is the modern interpretation of the millennia’s old play that permeated the costumes, music, and set.

Hippolytos, who worships the war god Athena, is wearing military green, complete with dog tags around his neck. Instead of the traditional white masks associated with Greek tragedy, the actors’ faces were adorned with colorful splashes of paint, resembling David Bowie’s Aladdin Sane.

At one point, a member of the chorus can be heard singing Simon and Garfunkel’s classic “Scarborough Fair,” in a fit as the intense drama unfolded.

And the intensity never stopped from start to finish.

Particularly impressive was how the actors performed the play without stopping. There were no scenes, just an unending rollercoaster ride of love and despair.

This was Kirby’s first Greek tragedy, and she said that it was mentally draining to prepare for it.

“I drink a lot of water and tea because there is a lot of screaming,” said Kirby. As for mental preparation, Kirby finds herself listening to powwow music before taking the stage because she finds the drumbeat relaxing and comforting.

“This is a completely new ballgame for me, having been schooled in naturalism at the Turtle Island Theater Company in Kahnawake for 10 years prior to attending Dawson College.”

This is Kirby’s second year at Dawson and she loves it.

“It’s tough at times, but the industry is tough and I think that they are really preparing us for the real world.”

You can catch Kirby performing tonight and tomorrow night at the Dawson College Theater, 2000 Atwater, at 8 p.m. Tickets are pay what you can and the runtimes of the two plays is just under two hours.