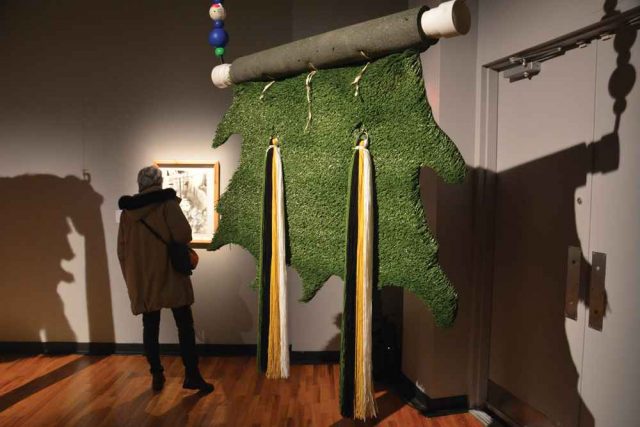 Cree artist Virginia Pésémapéo Bordeleau’s series of large-scale portraits look directly at visitors from the wall opposite the door, and provide an invitation to the space with the humble wisdom that emanates from the elders portrayed.

“They are elders from my community,” said Bordeleau, who grew up in Rapides des Cedres, Quebec. “Many of them have died now because I started these paintings many years ago. It is an homage to the First Nations of my place.”

The portraits join work from Kahnawa’kehró:non artist Marian Snow and are part of “Wâpou’och I’skawa’och/Ie’io:kas,” which translates as “she sees” in Cree and Kanien’kéha.

The first portrait in the series of eight is of Bordeleau’s grandfather, Ignace, and the others are Cree, Algonquin and Maliseet elders carrying on their traditions.

“They are the only ones who speak the language,” said Bordeleau.

Snow spoke about the images as flipping the show’s title on the viewer.
“They’re actually seeing us,” she said. “As we are seeing the works that are being shown, the elders have their eyes upon us, and it’s a very welcoming gaze… It’s a positive gaze that things are on a good path, a hopeful path.”

Adjacent to the portraits hang four of Snow’s installations featuring large pelts adorned with string, jingle dress bells, and other objects that conjure the impression of dance and traditional aspects of culture at times lost in modernity.

Beside the installations hang a collection of Snow’s paintings that stretch the length of the room.

Snow’s former teacher at the University of Ottawa, Peter Gnass, commissioned the show.

“I made the effort to get Marian here,” said Gnass, who originally contacted Ojibway sculptor Ron Noganosh to do the show, but he was unable to.

Gnass persisted, and was excited to produce the show alongside Bordeleau.

“This is a terrific place,” said Gnass. “It’s one of the better places in Montreal next to the museums, and I was not going to give up on Marian here. She’s really worth it. She’s talented. She’s very hard-working and she has good ideas.”

Bordeleau was excited to show alongside Snow.

“I didn’t know her before this exhibition, and I find she’s a very good artist,” said Bordeleau.

Snow was impressed by the show’s final look.

The work reflects Snow’s unique style and skill as an artist. It is something Gnass saw when Snow was at school, and has continued throughout the artist’s career.

“When I was teaching her, I always said defend who you are, and it really comes through in the pieces,” said Gnass.