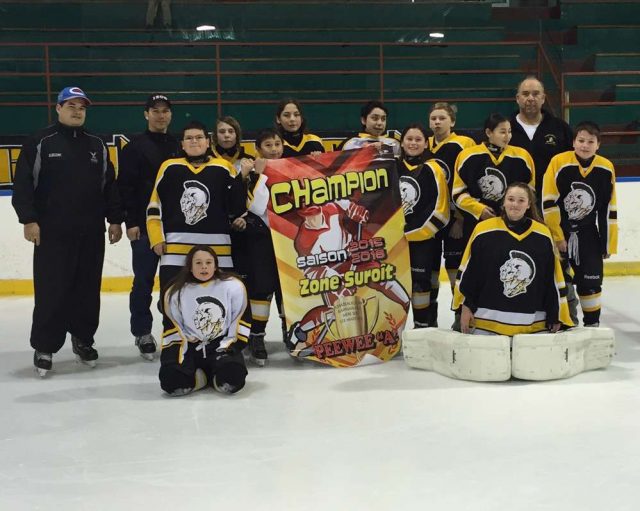 The Kahnawake Peewee A Mohawks finished the regular season top of the table with a 14-4-2 record, and will look to continue the hot streak heading into the playoffs that kick off for all levels tomorrow at 2 p.m. at the Kahnawake Sports Complex. (Courtesy Peter Jacobs)

The Peewee A Mohawks picked up their second second place tournament finish for the month last Sunday at the 8th annual Côte St. Luc Peewee `A` Outdoor Hockey Tournament.

“They played their best, they never gave up at any time. I would imagine they were tired by the end,” said head coach Curtis Diabo, who led the Mohawks to the top of the table in the regular season.

“It was an undisciplined game. The calls weren’t fair both ways, they still did their best, but we fell a little short. Fatigue was a factor,” said Diabo.

The tournament took place at the outdoor rink at Pierre Elliott Trudeau Park, but due to warmer weather melting the ice surface, the team was forced to play most of their games at Côte St. Luc’s the Samuel Moskovitch Arena.

“We all thought we would have had it, but we didn’t because they came out stronger,” said 12-year-old defenseman Sylvia White.

Though the Ducs won the tournament, the Mohawks squad owned the regular season with a 16-4-2 record in the Sud-Est league, and were presented with the league banner.

The Mohawks scored 74 goals on the season and let in 41 for an impressive plus 33 goal differential. In comparison, the second place Ducs ended with a plus 15.

“It’s a totally different game when you play a final than a regular season game. The kids have different emotions, but with that game, I guess you could say the more disciplined team won the game,” said Diabo.

The team heads into playoffs tomorrow.

“The kids will be well rested. They got two weeks off and will get to work on things in practice. For about two or three weeks, we didn’t have any practices because we were too busy in tournaments – you kind of get off your game plan when you don’t get to practice,” said Diabo.

Earlier in the month, the Mohawks took home another haul of silver medals at the Canadian Hockey Enterprises’ Canadian Cup Peewee A tournament, which took place at the Isatis Sports Complex in Chambly from February 12 to 14.

“We were undefeated there until the finals against Mount Royal,” said White, a grade seven multi-sport athlete at Kuper Academy.

The Mount Royal Diables won the championship banner 3-1, but White felt her team was still in good spirits.

“I think it was good because it was a tough game we played. It was kind of back and fourth until the second period,” she said.

The experience at the tournament, which included teams from across Quebec, Ontario and the United States, was also a bonus.

“It was fun playing against different teams that aren’t in the town league,” said White, “Playing with different refs, seeing how they work and how they practice and how it is different from our style of playing.”