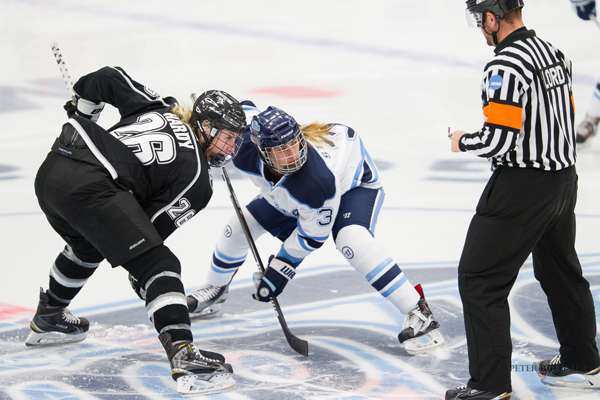 Two of Kahnawake’s top female hockey players had a healthy dose of playoff action in college hockey south of the border last weekend.

Junior forward Kanekaroroks McComber scored a pair of goals for the Morrisville State Mustangs in a 7-0 drubbing of the Johnson & Wales University Wildcats out of Rhode Island Saturday to advance to the semi-finals.

Centre Brooke Stacey, in her sophomore year, led her University of Maine Black Bears into a best-of-three playoff series against the number one-ranked and undefeated Boston College Eagles Friday. BC, led by US Olympic centre Alexandra Carpenter, won 5-2 and 5-1 to eliminate the Black Bears from the playoffs.

The Black Bears struggled at times throughout the NCAA Division I season often playing with a shorter bench than desirable.

“We had a lot of obstacles to overcome as a team,” said Stacey. “Most of our players were injured and we played a couple of weeks with barely three lines.”

In Friday’s game Maine hung with BC through two periods, but Eagle Dana Trivigno’s goal 1:38 into the third made the game 4-2, and the Black Bears were unable to score again.

Saturday, Maine scored early short-handed five minutes into the first, but BC controlled the remainder and scored five unanswered.

Stacey was asked about crossing sticks in the faceoff circle against the American Olympian Carpenter.

“I usually don’t think about who I’m taking the faceoffs against, but it was clear she would be good at them,” said Stacey.

“It’s pretty phenomenal considering how many points she has and how good she is,” said Black Bears coach Richard Reichenbach. “She won the Patty Kazmaier last year, which is like the Heisman for female hockey players, and we tried to match them up as much as possible.”

In her second year with Maine, Stacey has worked her way into a role as the team’s starting centre.

“She’s been amazing,” said Reichenbach. “She was strong last year, and she’s even stronger this year. She’s always been a physical player, but she has a little more strength. She’s better in the corners, better in front of the net, and that was evident because she really limited that line.”

In McComber’s first season in the NCAA DIII Colonial Hockey Conference with the Mustangs, she scored seven goals and 13 assists, and was a +10.

The team did well in the inter-conference games, but struggled when playing more established programs.

“We lost quite a few of our out-of-conference games to teams that have been good programs for years now, but they were decently close games,” said McComber. “We only have two lines so we did pretty well for a first-year program.”

The 21-year-old McComber transferred from Norwich University at the beginning of this year, and has found herself in the unfamiliar role of veteran on the squad.

“We’re a young team here in Morrisville, so I took on sort of a “mom” roll on the team being the oldest player,” she said. “Norwich held a roster of 26 players with Morrisville having only 14. That’s a big difference. I must say I’ve never played so many minutes in my life.”

Heading into tomorrow’s semi against the Endicott University Gulls, McComber knows the team cannot assume to end up with the lopsided shutouts the Mustangs have run to in the last three outings.

In addition, McComber knows her young team needs to secure the defensive zone in front of goalies Renee Schmaltz and Taylor Pincheon.

“There’s always room for improvement on our defensive zone coverage,” said McComber. “It’s definitely going to be a good game.”

The winner of tomorrow’s game will play the winner of the Becker College v. Stevenson University game in the final.