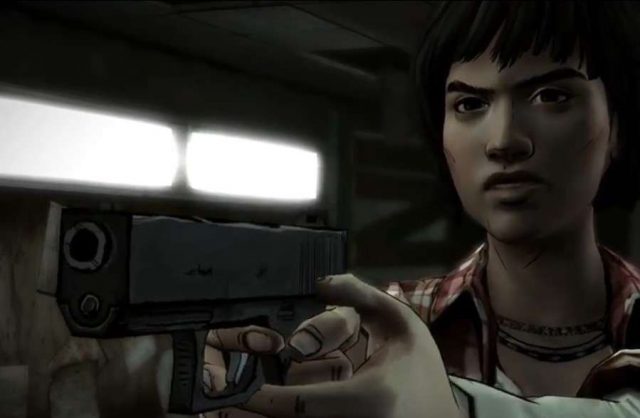 Kawennáhere Devery Jacobs went through a spat of time when she may have thought Rhymes for Young Ghouls would be her heroic swan song in the acting world.

In acting, not working is not progressing, and Jacobs suffered through over a year of near misses, callbacks and almost landeds since the 2013 role.

Jacobs, decked out in bubble gum pink cropped hair, will star in The Sun at Midnight that she filmed in Northwest Territories, and nabbed roles in a pair of shorts – Running Eagle, and A Big Black Space that are set to come out this year.

In addition, Jacobs took her first twirl behind the mic, doing voice over work for the short animated feature The Mountain of Qwawk, created by Haida director Chris Auchter.

Jacobs then sent in a voice audition for The Walking Dead: Michonne video game, which she booked.

“It’s pretty exciting because I haven’t done much voice work before,” said Jacobs, who voices Samantha. “It was a crazy experience. There’s a lot more that goes into it than people think because it’s a video game you have to give every single alternative possible depending on what choices are used.”

Though not released, there’s a safe bet the game will not include happy princess voices or whimsical unicorns.

“It was pretty heavy material – crying, screaming, sobbing and running away from zombies for about 10 sessions,” said Jacobs. “It’s a lot of fun.”

The 22-year-old also caught a curveball of a role when she grabbed a shotgun and got decked out as rookie cop Daisy Kross on the sequel to the 2014 film WolfCop.

The IMDB description of the first film reads: “as a series of strange and violent events begin to occur, an alcoholic policeman realizes that he has been turned into a werewolf as part of a larger plan.”

“It’s like a breath of fresh air after dealing with so many dramas,” said Jacobs. “It’s a totally different mindset onset… It was just a lot of fun, a lot of blood, a lot of guts, a lot of supernatural goriness yet comedic.”

In addition, Jacobs’ wrote and directed the short film Stolen that will be ready to premiere in the fall, and fictionalizes an experience drawn from the missing and murdered Indigenous women of Canada experience.

She also booked a supporting role in The Land of Rock and Gold and Level 16 feature films.

To state the blaringly obvious, Jacobs has been busy.

“It’s kind of crazy because, in 2016, I have seven projects coming out and am working on two of them that will come out next year, and it’s only going up,” she said. “I’m in the works for another short film in Toronto.”

It is a far cry from 2013/14, when Jacobs missed almost anything that came her way.

“I went through a real cold streak,” said Jacobs. “It was frustrating. I had a lot of callbacks, a lot of almosts that didn’t end up turning into anything. It was really frustrating and really discouraging, and it’s hard not to let all the rejection get to you.

“Now, to be booking this much work, I’m just very thankful for having these opportunities. For me, it’s all about being on set. The festivals are fun, but I’d rather be working.”