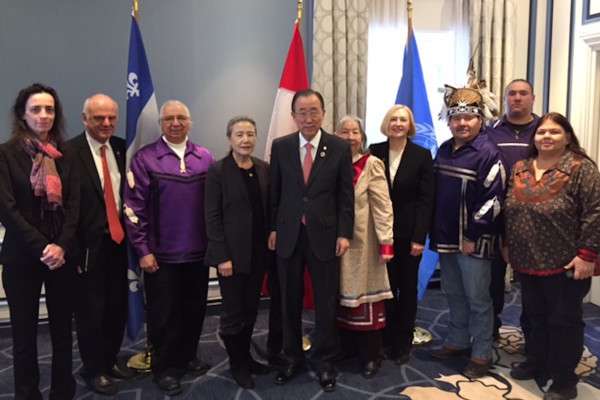 By: Darian Jacobs, The Eastern Door

A group of representatives of the Mohawk Nation and Secretary General for the United Nations Ban Ki-Moon met February 13 in Montreal for a welcoming and conversation on Indigenous issues.

Kenneth Deer was one of the people who took part in the meeting and is the Secretary of the Mohawk Nation at Kahnawake.

“We were very lucky to meet him. Some people are wondering how we pulled it off,” he said.

The meeting took place at the Ritz Carlton Hotel in Montreal and came together at the last minute. Chief Curtis Nelson from Kanesatake, Glenda Deer, Tehonerhatathe Nelson and Lynne Norton joined Deer at the meeting.

The group wanted to welcome Ki-Moon to Mohawk Territory, the Eastern Door into the Haudenosaunee territory.

“We gave him the Words at the Edge of the Woods by symbolically cleaning his ears, eyes and throat to take away any dirt, pollution, negative things he may have heard or seen, (and) to clear his throat so he may speak clearly,” explained Deer.

Ki-Moon had never been welcomed in this way when visiting Canada before and was grateful for the experience, according to Deer.

Ki-Moon gave a prepared statement recounting all the activities regarding Indigenous Peoples during his term as Secretary General.

He then asked for advice on how to achieve the 17 objectives of the Sustainable Development Goals for Indigenous Peoples.

The group responded by suggesting that he appoint a special representative in his office to support the rights of Indigenous Peoples in the UN system.

“Of course we would like to see an Indigenous person in that role. Someone who knows the UN system,” explained Deer. “That person should work right out of the Secretary General’s office. This would be a signal that the Secretary General is serious about getting the UN to implement the rights of indigenous Peoples.”

Many issues faced by Indigenous people in Canada today were discussed also such as the poverty many communities experience, even in a developed country like Canada. They discussed disappearing Indigenous languages and what we need to do to save those languages. They brought up the issue of substance abuse and the treatments centres, which need more support.

Nelson, who is executive director of the Onen’tó:ken Healing Lodge in Kanesatake, gave Ban Ki-Moon a letter addressing this problem.

At the end, they presented him with the gifts of a Haudenosaunee flag and a necklace emblazoned with the Tree of Peace and explained the Great Law of Peace. Nelson presented him with a string of wampum, which he said would protect him when he travels.

“The Secretary General was very attentive throughout the meeting. (It) was better that we had expected considering the short time frame we had to organize a delegation,” said Deer.

Negotiations are about to begin concerning the next meeting in New York. The delegation has yet to be decided, but it will be chiefs and clan mothers of the Haudenosaunee Confederacy. It will likely be during the week of May 9 when the UN Permanent Forum on Indigenous Issues is in session.