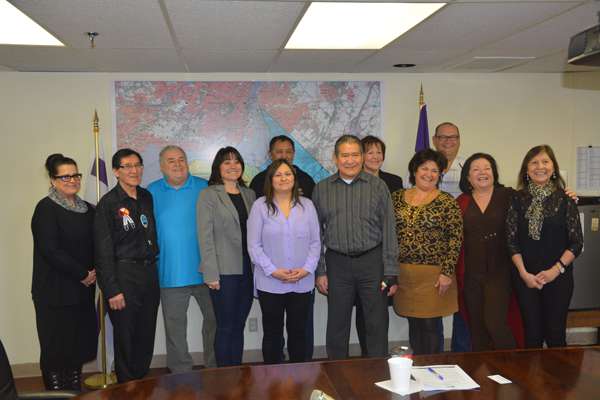 The As’in’I’wa’chi Ni’yawak nation met with the Mohawk Council to gain support for their comprehensive land claim.  (Daniel J. Rowe, The Eastern Door)

As the 18th century closed, history tells of 110 Haudenosaunee who left Caughnawaga and headed west with the fur trade. They arrived at Jasper House at the foot of the Rocky Mountains around 1805.

Fast forward to this week, when representatives of the As’in’I’wa’chi Ni’yawak nation, who live in the northeastern BC community of Kelly Lake, visited the Mohawk Council of Kahnawake and rekindled political ties, as the BC nation continues to fight a decades old land claim grievance with Canada.

“We’re here today to come and visit our relatives, and also ask for their support in our long grievance with the government of Canada,” said chief Kwarakwante Cliff Calliou. “They’re dragging their feet not to deal with us, and, in some ways, ignoring us and telling us that we are not Indian.”

The nation of about 225 people claims a territory of more than 40,000 square kilometres including a portion in Jasper National Park. The nation are descendant from the Kanienkehá:ka, and have absorbed other peoples into their culture over the two centuries as a result of warfare, adoption of captives and offering shelter to displaced nations.

The nation met with Mohawk council chiefs in December at a special Assembly of First Nations (AFN) meeting in Gatineau, Quebec.

“We went over their struggles and what they were up against,” said council grand chief Joe Norton. “They were looking to us to help support them, and confirm who they are. The ancestry, the relationship, and all of that. Basically, we said ‘yeah. We’ll do that.’”

The nation filed a comprehensive land claim in 1996, and went to court in 1997, and has been jumping through the hoops in the land claim process since.

“Since 1997, we’ve been under case management,” said Calliou. “We are finished with the questions that the government of Canada has asked.”

Indigenous Affairs minister Carolyn Bennett, according to the memo, referred the nation to a “special claims” process rather than the comprehensive claim filed in 1996.

The nation is now seeking broader support in its fight.

“At this point in time, we’ve ask for support,” said Calliou. “That’s to do with Trudeau’s campaign promise to say that all these claims in front of Canada should be dealt with out of court.”

Calliou said initial support from other communities including Kahnawake has been positive.

“Support’s been good,” said Calliou. “We first started out in December of 2015. We came through Gattineau, Quebec to a special AFN meeting, and we put a resolution there to have support from the AFN, and we got unanimous support, which means every chief straight across Canada supports our claim.”
The situation is more complicated with the nation’s neighbours in the Treaty 8 region. Treaty 8 encompasses northern Alberta whose chiefs signed a memorandum of understanding with the Kelly Lake nation in 1994. The present day chiefs, however, have cooled in their stance, according to the memo. The As’in’I’wa’chi Ni’yawak nation did not sign treaty 8, and have taken a stance against the resource development -particularly gas and oil – that many treaty 8 nations have benefited from in terms of royalties.

According to the nation’s memo, oil and gas resources were opened in their territory in the late 80s creating roadways through formerly isolated territory.

The nation struggles to find recognition in the region as a community development interests need to get consent from before approving projects. Calliou said there has been minimal consultation from any government with his nation, and he would like that changed in addition to a recognition of his people as a distinct Onkwehón:we community with matrilineal ties to the Kanienkehá:ka.

“At the end of the day, we don’t want a reservation,” said Calliou. “We want to be able to have self-autonomy, self-government, self-determination, and look after ourselves like we’ve looked after ourselves for many years. We want to have a stronger say in how our land is being developed.”

Calliou said his nation is frustrated, and nearing the point of doing something about their frustration.

“My people are ready to take action, and I try in so many ways to avoid that, but at some point in time, I can’t keep holding my people back,” he said. “Something has to happen. Something has to take place.”