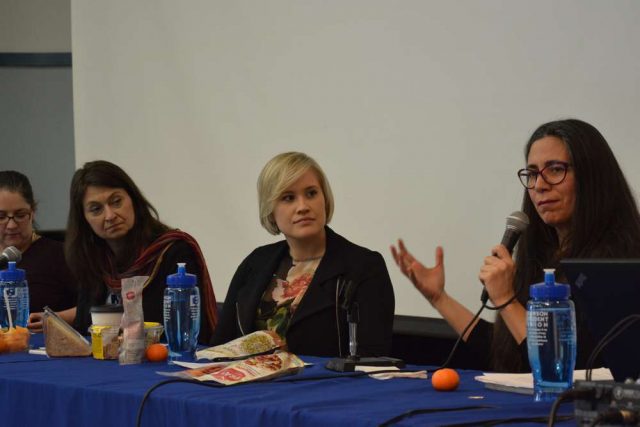 What is an Indigenous artist’s responsibility in the artistic and media world?

It was a key question posed to three Indigenous artists at a discussion panel at Dawson College Wednesday as part of social science week.

The event was titled “Resurgence in Indigenous Media Arts” and was sponsored by SPACE (Sciences Participating with Arts and Culture in Education) at Dawson.

The panelists spoke about the responsibility on them as Indigenous artists to represent their people and the challenges inherent in that duty.

“It’s true that when you’re Mohawk and First Nations, people expect you to represent a larger group of people than yourself, and that’s very difficult and tricky,” said Fragnito. “There’s disagreement. There are many different kinds of people. I think you learn pretty quick or you get taught that you can’t be representing everyone.”

Fragnito said she reminds those viewing her work that she represents her point of view within the greater context.

LeBorgne spoke of the opportunity as an Indigenous actor and director to present a perspective from the community, but also the burden of having to represent Kahnawake.

“For me, it’s complicated to be from an Aboriginal community and to be in the spotlight.”

The floor was also opened to Dawson students who asked about representation, the future of Indigenous media, and what makes a Native star unique in the contemporary media landscape.

LeBorgne responded to a critical question from an audience member, who asked why Mohawk Girls tends to focus on partying, sex and fighting rather than a more positive representation.

“It is TV, so some of it is sort of exaggerated. It’s comedy and you kind of have to push the envelope a little bit,” said LeBorgne, who was recently nominated for a Canadian Screen Award for outstanding comedic performance.

“Some of the stuff (on the show) does happen. It does show us partying or we’re at a bar (but) there is no drug use in the show, and we are having relationships, which includes sex, and that’s real. We do do that.”

“We give good examples of how Kahnawake is a very tight-knit community,” said LeBorgne. “There are examples in the series throughout how we’re always throwing fundraisers to help each other raise money to help schools and different organizations and that’s 100 percent true. Kahnawake is a community that really knows how to come together when people are in need.”

The questioner added that the show at times adds to the image of the community.

“It doesn’t really help with the stereotype that’s already surrounding the community,” she said.

Clips from Smith’s documentary determiNATION songs, Fragnito’s TimeTravellerTM machinima digital art piece, as well as Mohawk Girls were peppered throughout the panel, and the panelists were then asked how the work asserts an Indigenous perspective, and the purpose of the particular work.

Episode three of Skawennati’s TimeTravellerTM shows the main character Hunter’s experience of the Oka Crisis. The clip is a digital recreation using actual audio and a series of Fragnito-designed characters that Hunter interacts with.

“This episode was that one where I had the feeling (of responsibility) the most where I wanted to be really careful,” said Fragnito. “When you’re telling a true story there are so many more players than you can actually fit into a true story sometimes.”

The panelists also spoke about how the work presents aspects of Indigenous resurgence and also envisions Indigenous future.

LeBorgne spoke about how she’d like to see Indigenous actors as more a part of the mainstream industry, not just cast for “Aboriginal roles.”

“Why not cast an Aboriginal actor in the new hospital drama, or why can’t the lead guy or gal in the next rom-com be Aboriginal?” she asked.

Being women, the panelists could likewise speak about women’s role in the Indigenous media resurgence and technical innovation.