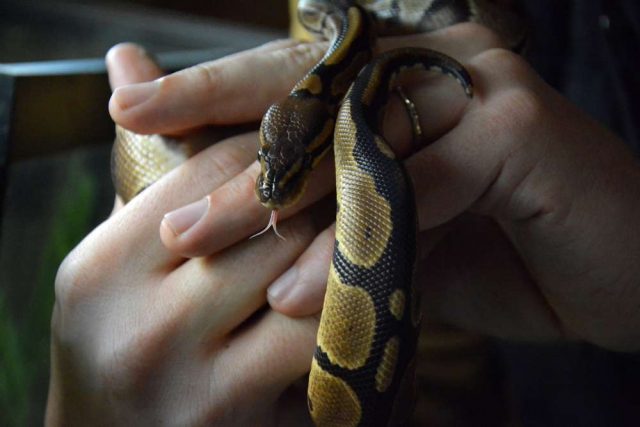 This slithering ball python is just one of the critters the Jungle Love Pet Shop has to offer. (Jessica Deer, The Eastern Door)

While Morris Day and the Time certainly weren’t thinking about family pets when they wrote their 1985 single Jungle Love, it’s the name of the newest business in town that caters to local animal lovers.

“I always wanted to have a pet shop,” said owner Cathy Diabo. “I thought now is the time to do it, or I’ll never do it. I worked in one in LaSalle when I was young – maybe 13 or 14 years old and loved it.”

The pet store, which is located on Veterans Boulevard, opened its doors last Friday.

“A good majority of community members have pets and everybody has to leave town to get their daily needs or needs for their animals, so it is easier to bring it to them,” said Diabo.

For Jonn Mayo, making trips to pet stores is something he has to do every other week to purchase food and supplies to take care of his growing collection of reptiles.

Mayo owns a large variety of geckos, frogs, snakes and lizards for his business Radical Reptiles, an interactive and educational reptile show.

“My snakes eat properly-sized rats, mice and rabbits that match the snake’s size and could be fed weekly or every other week – some even go up to a month without eating,” he said. “Smaller mouths like frogs and lizards will eat different amounts of crickets daily, among other things like worms and other bugs.”

Mayo’s two-year-old Burmese Python is currently around seven feet long and is fed rabbits that weigh around 400 grams.

He said having a pet store in town is “definitely a total asset and benefit, knowing that if I need anything last minute, I won’t have to leave town.”

“We have mice and rats, lizards and snakes. We’ll have hamsters soon and gerbils,” said Diabo. “I just got in budgies and canaries. I’ll have finches in soon.”

While the store’s shelves are stocked with a variety of food, treats, toys and other products for fuzzy four-legged friends, don’t expect to find any cats or dogs available for purchase when you walk through the door.

Diabo said she supports adopting cats and dogs through Kahnawake’s Animal Protection Department and is hoping to collaborate with them in the future.

Diabo said she’s not just catering to the needs of household pets, but farm animals as well.

“You’ll be able to get your feeds and mixed grains here,” said Diabo. “There are a lot of people that are raising chickens now for their eggs and for their meat. Instead of having them to go out of town, they can come here and pick it up.”