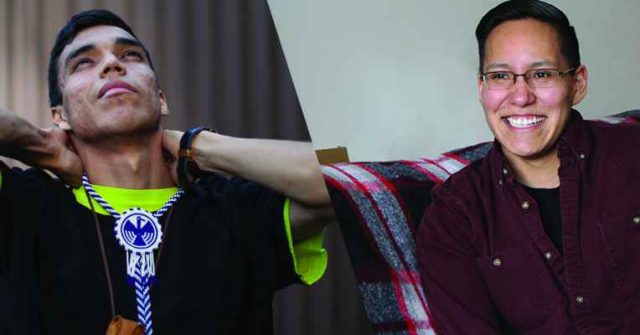 Sex, Spirit, Strength is Montour’s directorial debut, and a powerful and engaging portrait of two men in their late 20s grappling with very real and different issues that many – Indigenous or not – often struggle to come to terms with.

Jack Saddleback is a transgender person, who was born a girl, but soon discovered that his gender identity did not match his physical gender.

In the documentary, Jack recounts an experience when he was three or four being dressed in boy’s underwear, and realizing that he was different.

His story, told with eloquence and emotion, is one full of bullying, confusion, stress and suicidal ideation, but also acceptance, love and support. He’s an engaging subject that speaks well and gently guides the viewer to understand hurdles a trans person must face throughout their lives.

Michael Keshane openly speaks about being molested as a baby by his birth father, and his subsequent years being afraid of Native men.

After being removed from the abusive situation, and moved to live with his mother and grandmother, Keshane eventually moves to north central Regina.

Keshane is visibly shaken on screen revisiting the community he calls “the hood.” He recounts his life that took a distinct turn when he met and fell in love with an HIV positive, drug addicted prostitute.

Keshane became a regular intravenous drug user with his girlfriend, who he prostituted out to pay for the couple’s habit.

Keshane’s retelling of the moment in January 2010 when he was informed that he too was HIV positive is powerful. He returns to his grandmother’s presence in his life, and some scenes are particularly heart wrenching to watch, as he speaks about letting her down.

The tough times shown in the first act are balanced by both men’s journey to a place of respective sobriety and acceptance.

“Nine months sober, I reflect on how much meaning my life has and how much left there is to do,” said Keshane in the film. He is now a film director and runs Act Chapter 27 Films in Toronto.

Montour’s quality as a documentary filmmaker is shown throughout the film, as she chronicles the two men’s lives. She does not fall into the trap of many a documentarian that puts too much of the director’s voice or face on screen.

The recreation scenes, where needed, are simple and subtle and she doesn’t overload the film with charts, graphics or facts, which she very well could have.

The film’s website, sexspiritstrength.ca, includes a vast amount of information and resources about sexual identity, HIV/AIDS research, suicide and other topics touching the subject.

Response on the night was overwhelmingly positive to the screening.

“Courtney was really smart in choosing the chronology of the footage,” said actress Kawennáhere Devery Jacobs, who attended Wednesday. “I also thought the profiles of these two young men were really powerful. The cameras felt like a fly on the wall, watching their deeply personal experiences. I got a lump in my throat a couple of times, but it never felt like a sob story.”

Montour said Wednesday that she hopes the film will be used in secondary schools across the country, and that she wanted young people of all backgrounds to understand the issues her protagonists went through.

Montour said the film will eventually be available on APTN’s website to stream after the festival circuit has run its course.

Keshane was at Wednesday’s screening and spoke about seeing the documentary for the fifth time.

“It changes every time,” he said. “Seeing it here I was actually enjoying myself. I was laughing.”

Even seeing the dramatic scenes where he remembers his late grandmother with his mother bring smiles that were once tears.

“Because I know they’re happy,” said Keshane. “My grandmother is in the Spirit World. I know she’s watching over me. My mother has a daughter that’s an accountant and a son that’s an emerging filmmaker in Toronto; two kids to be proud of.”