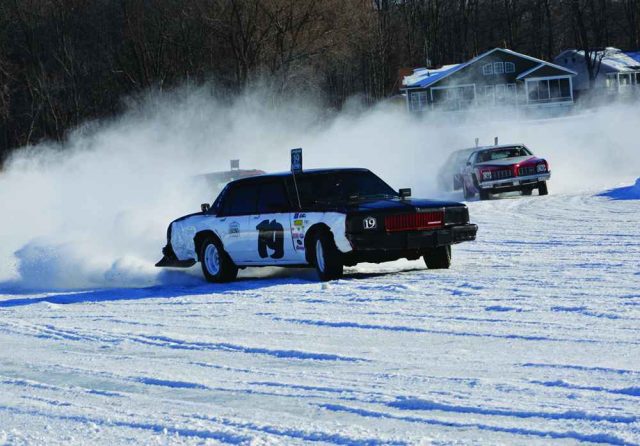 Not so for the Kahnawake Marina Super Series drivers, who hit the ice Saturday and Sunday, and saw some new faces on the podium.

Saturday, the rear-wheel-drive category saw Kiefer Diabo take the checkered flag with Kerry Goodleaf driving his No. 51 Dodge Neon to the podium in the front-wheel category.

For the first time in forever, Bryar Lawrence did not win the Junior division, with Jake Rice knocking him off the podium for Rice’s first win.

“I’ll be back,” posted Lawrence on Facebook after the race.

Lawrence was back on the track Sunday and won the Jr. division to climb back onto the podium.

Adam Jacco drove to first place in the rear-wheel division Sunday, and Zach Goodleaf got his first checkered in the front-wheel category.

“I came, I saw, I conquered,” said Goodleaf, who regretted sitting out Saturday’s race, feeling the ice may be too thin.

Standing water on parts of the track along with a softer ice surface meant more grip for the racers at some points, and slickness in others. Goodleaf said he was able to hit 80 KM/H on front stretches.

“Turns three and four were almost completely covered in standing water,” said Goodleaf. “There was only a 10-foot wide strip of ice that would actually give you grip without slowing you down.

“I learned the hard way. In the first heat I started on pole, but in the first corner I hit the standing water and lost almost all my speed.”

n for second place, which helped Goodleaf push his lead.

“I was expecting to see Skyler or Brent catch up to me, but they kept getting smaller and smaller in my rear-view mirror,” said Goodleaf. “Turns out they got tangled up in one of the corners that allowed me to get away.”

With three laps to go, Goodleaf had a solid half-lap lead and was able to cruise to the first-place finish.

“I remember seeing Brandon White counting down the laps for me,” said Goodleaf. “I swear he couldn’t count down fast enough. On the backstretch there was a gentleman on an ATV waving me around. Turns out it was my uncle Terry.”

Goodleaf drives the No. 93 ‘Jennifer’ (his 2002 Volkswagen Jetta named after Jennifer Lawrence). The car also dons No. 68 in honour of Eli Hemlock, a family friend, who wore the same number in lacrosse. Hemlock died tragically at age 14 in an ATV accident June 25 of last year, and Goodleaf is dedicating his season to Hemlock.

Organizer Brandon White said there will be races this weekend, as there is still 14 inches of ice at the oval. Tomorrow, the ice bikes will race as well for the first time this season. Races are set to start at noon.